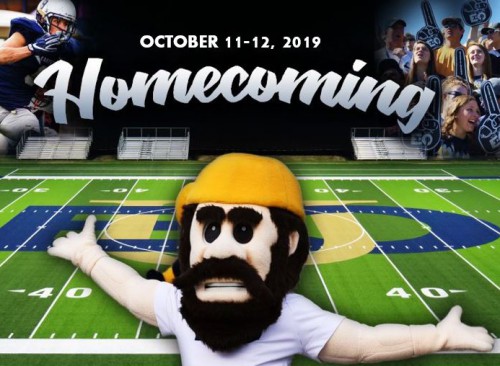 Oct. 1, 2019 LA GRANDE, Ore. –  Eastern Oregon University welcomes Mountaineer alumni and friends to celebrate their alma mater Oct. 11 and 12 on campus in La Grande with a host of homecoming festivities.

The weekend begins Friday morning at the Mountaineer Athletic Association’s annual Scholarship Golf Scramble at Buffalo Peak Golf Course in Union, sponsored by Side A Brewing. Mountaineer fans and alumni join student-athletes and coaches for a friendly golf tournament fundraiser in support of scholarships.

The Homecoming Parade sets off from Max Square at 5 p.m. that evening with Grand Marshal and Distinguished Alumnus John Nightingale leading more than 50 floats through downtown La Grande. Nightingale returns to the head of the parade after leading it with the EOU band 50 years ago.

Nightingale will also share a presentation about his work with ocean conservation, “The World’s Ocean and our Planet’s Health,” at 3 p.m. on Friday in Huber Auditorium in Badgley Hall. The talk is free and open to the public.

Following the parade, the Alumni Association will honor Nightingale, alongside Dixie Lund Service Award recipient John McMahan and Honorary Alumnus Bill Howell at 6:30 p.m. The ceremony and reception take place in the Gilbert Event Center on campus, and are free and open to the public.

Three individuals will be inducted into the Athletic Hall of Fame during the ceremony. Volleyball alumna Grace DeBoodt Bliss will join football alumni Alan Peterson and Rick Ward in accepting their nominations to join the EOU Athletic Hall of Fame. Football coach Don Turner will also be inducted posthumously, and the Alumni Association hosts a reunion lunch at noon on Saturday for former players and coaches to commemorate him. Online registration is open and costs $20 per person at eou.edu/alumni/homecoming/turner.

Afterward, students will hold a bonfire beside the sand volleyball court outside of Quinn Coliseum, starting at 8 p.m.

Saturday morning, community members, alumni and friends of EOU are invited to participate in the Homecoming Run/Walk. Registration begins at 7:30 a.m., and attendees can choose from a 5K, 10K or kids’ one-mile route that begins near Zabel and Ackerman halls in the center of campus.

Softball alumni will relive their glory days with a fast-pitch exhibition game at 9:30 a.m., and athletics events abound throughout the weekend. The EOU volleyball team faces-off against Corban University at 5 p.m. Friday, and against Northwest Christian University at 1 p.m. Saturday in Quinn Coliseum.

Baseball alumni reunite with former coach Howard Fetz from 1 to 3 p.m. in the Alumni Room on the second floor of Ackerman Hall. That afternoon, a fashion show featuring items from Real Deals, the EOU Bookstore and EOU Athletics will take place in the lobby of Quinn Coliseum.

The weekend culminates with the Mountaineers’ homecoming match-up against Montana State University-Northern at 6 p.m. Saturday in Community Stadium. Skip the line and purchase your tickets in advance at eousports.com. Celebrations begin at 3 p.m. in the Edward Jones-Mary Horn Tailgate Zone.

For more information about EOU Homecoming and a complete schedule, visit eou.edu/alumni/homecoming.