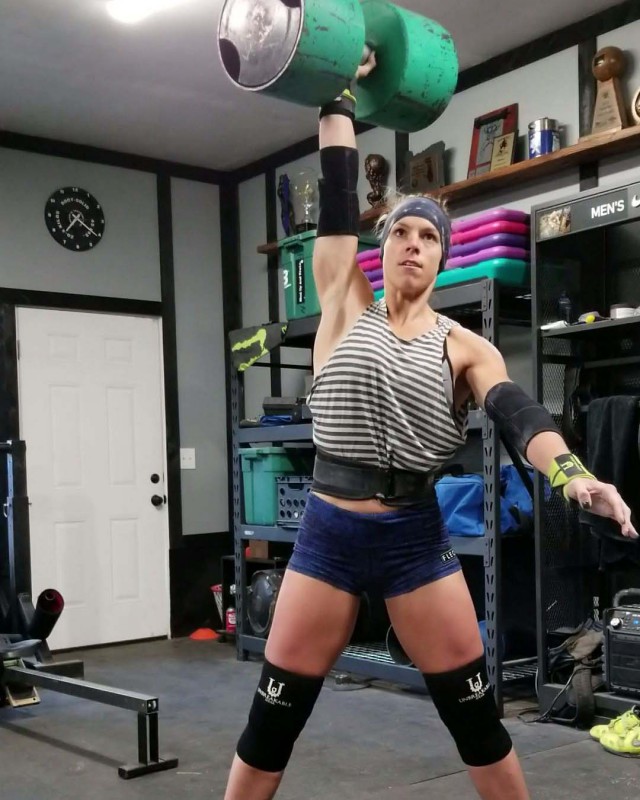 “So we’re just standing there looking at each other, holding more than double our body weights in our hands. We got 30 seconds in and she’s looking strong, then all of a sudden at about 40 seconds she dropped it.”

Ashlee Munsey, ’10, ’11, held onto her 375-pound metal frame for about a minute before she  claimed victory as lightweight women’s champion of the national Strongman competition last fall.

Her husband Andy, ’12, who also competes in Strongman events, and her sister ran out onto the floor to congratulate Munsey. She said the face-off tiebreaker made her win extra sweet.

“In 2016, I finished second and missed a pro card, in 2017 I went to a different competition and missed out on my pro card by half a point,” Munsey said. “That’s why I didn’t want to let go. It was a really awesome moment.”

The pro card Munsey finally earned is a ticket to the next level of competition in Strongman events. She started competing as a novice before entering open events four years ago.

“You can win money as a pro,” Munsey said, “But I’ll probably never break even with what it costs to go to the competitions.”

Munsey played basketball at EOU and was a thrower on the track team. After college, she was on the lookout for a competitive outlet. She accompanied her husband to the Strongman nationals in 2014 and after finishing a marathon that same year, decided to give the sport a try.

“I dreaded getting up to run, but I had always enjoyed lifting,” Munsey said.

“Most people picture really giant human beings when they think of Strongman, but if you saw me on the street you wouldn’t guess that I can deadlift 400 pounds.”

She placed second in her debut competition, sandwiched between two national champions in first and third. She had found her sport.

Munsey’s weekdays begin at 4 a.m., when she and Andy get up for their morning workout. Three days a week they head to their backyard gym to do squats, deadlifts, and other strength training for a couple of hours before they both go to work at Munsey’s other alma mater, North Central High School in Spokane.

Now in her eighth year at NCHS, Munsey teaches math to teens who she said would probably never suspect her hobby. 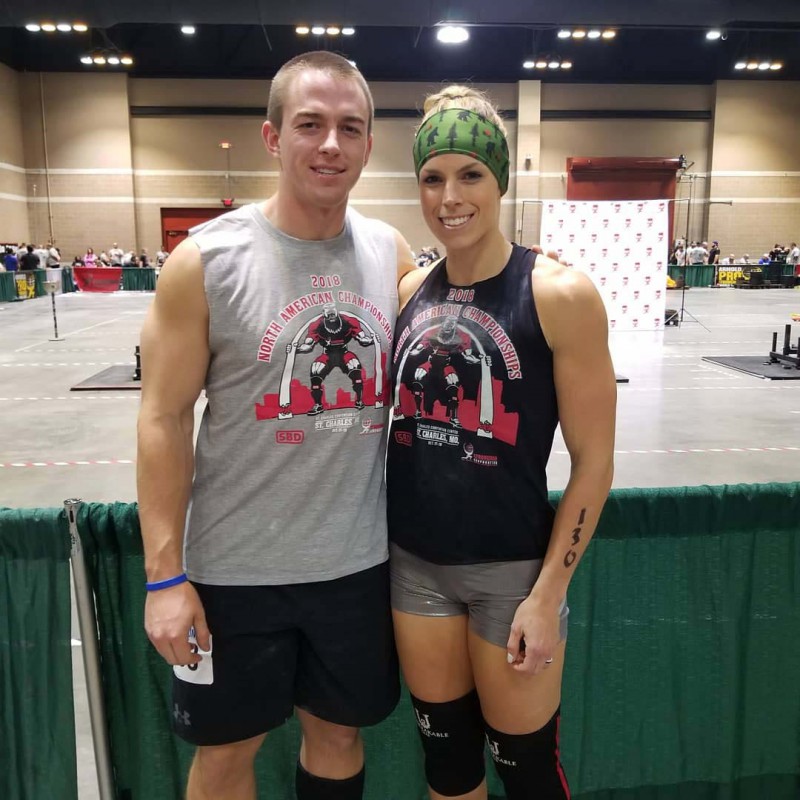 “Most people picture really giant human beings when they think of Strongman, but if you saw me on the street you wouldn’t guess that I can deadlift 400 pounds,” she said

On Saturdays the Munseys spend several hours working with more unusual equipment, including farmer’s handles, a yoke, giant concrete spheres called atlas stones, and even an actual log from a tree in their yard. Cardio, nutrition and a lot of recovery fill the rest of their days.

Their commitment is paying off. Andy finished seventh at nationals in 2018, a personal best. Munsey’s win this year was her fourth appearance at amateur nationals.

Along the way, Munsey continues to advocate Strongman as an entry point for inexperienced weightlifters.

“You can do more than you think,” she said. “People are a little intimidated at first, but it’s a sport that’s easy to enter and it’s a really friendly environment.”

Munsey recently got an endorsement to teach P.E., and hopes to introduce a women’s weightlifting class at her high school in the fall.

“It’s an opportunity to show girls that there’s a lot to gain in the weight room, and you do belong there,” she said. “Every day is an opportunity to get stronger, every day you can make progress — even if it’s just one more rep or 2 more pounds.”

Points are awarded for how many people you surpass in each event. Since there were 23 women competing in the lightweight category, Ashlee earned 23 points for each first-place finish. Second place earns 22 points, third gets 21, etc.

Axle Clean & Press
Lift the 140-pound bar to shoulder height, and then raise it overhead as many times as possible in a minute.
Ashlee finished in the middle of the pack with 10 reps.

Frame Carry
Stand in the middle of a 440-pound metal frame, pick it up and carry it 60 feet as fast as possible.
Ashlee won with 9.78 seconds.

Frame Deadlift
Pick up a 375-pound frame as many times as possible in a minute. The handles are slightly bigger so it’s harder to grip.
Ashlee won with 16 reps and finished Day 1 in second place, behind the leader by just half a point.

Circus Dumbbell Press
Lift a giant 85-pound dumbbell to shoulder height, and then raise it overhead with one arm and return it to the floor as many times as possible in a minute.
Ashlee tied for sixth with 9 reps, and was down 4 points going into the final event.

Moving Medley
Block Carry: Pick up a weighted metal box, carry it 30 feet, set it on a mat and sprint back.
Duck Walk: Stand over a 150-pound stack of weights with bar through the middle, grab it and waddle 30 feet as fast as possible.
Sled Pull: Use a rope to pull a 200-pound sled arm-over-arm 30 feet.
Ashlee placed second in the medley, tying for first overall with 98.5 points.

Frame Hold
Lift a 375-pound frame off the ground and hold for as long as possible.
Ashlee won, holding the frame for about a minute total. 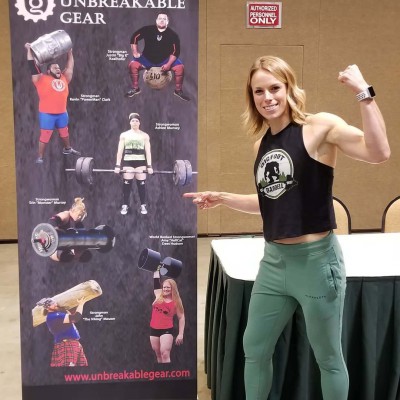 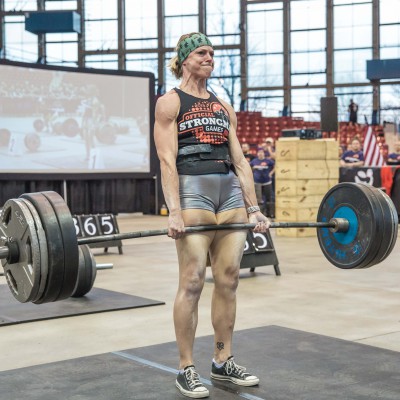 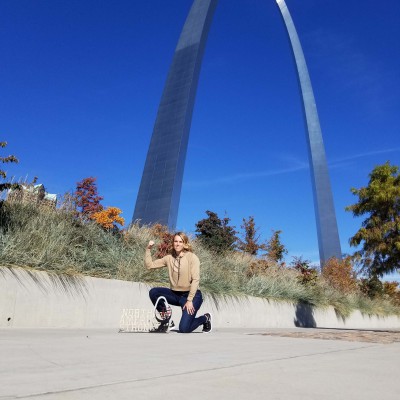 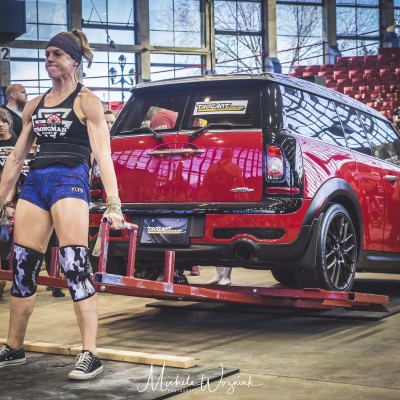 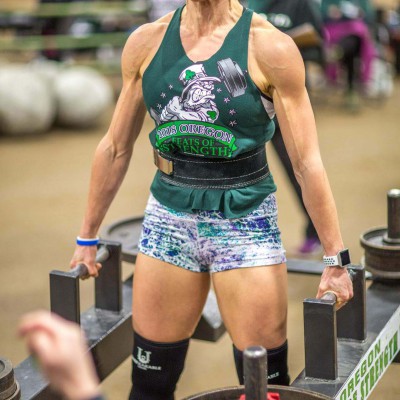 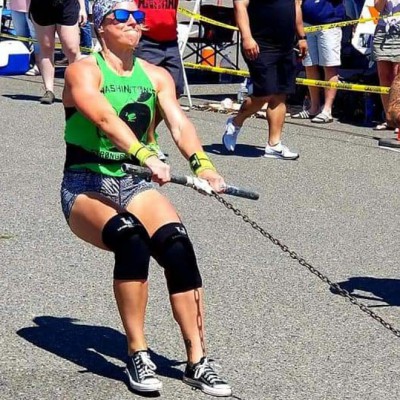 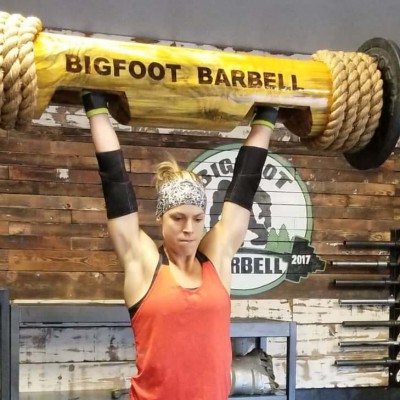 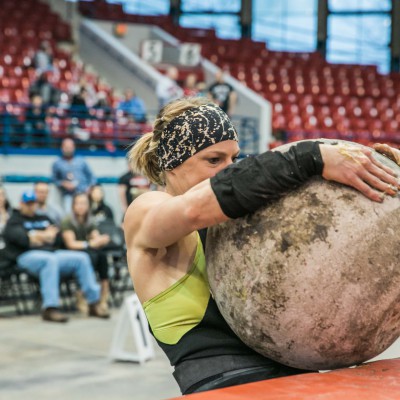 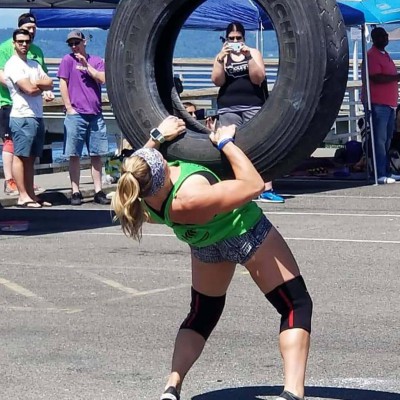 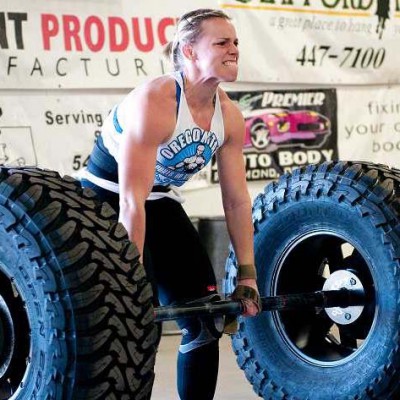