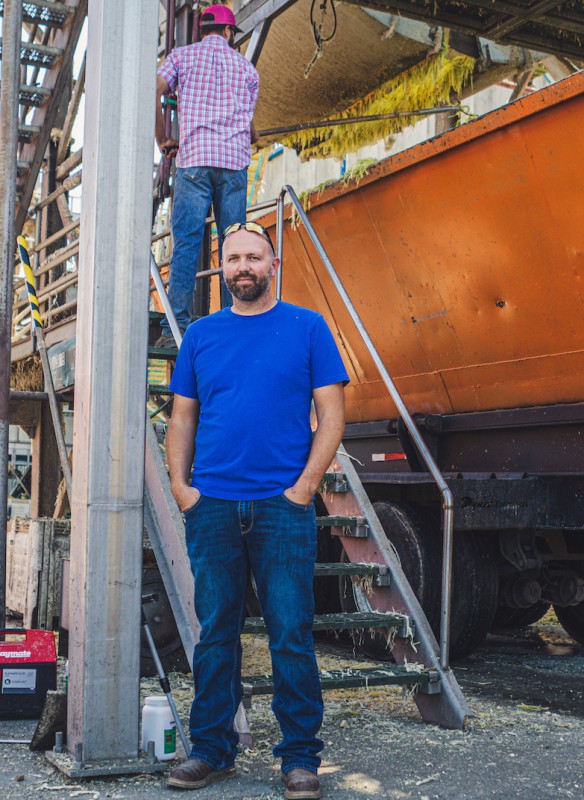 Luke Dynes, ’02, is the poster child for the self-made business executive — but his work goes beyond his success in agriculture.

Dynes moved to Eastern Oregon as a teenager from Danville, Illinois. He attended Hermiston High School and spent summers in Elgin. Motivated to get an education and gifted with a strong work ethic, Dynes attended Oregon State University’s agricultural science program at EOU’s La Grande campus and graduated with an Agriculture Resource Economics degree. He was in business for himself shortly after graduation, harvesting crop byproducts in the Columbia River Basin under the name Pacific Ag.

“We would go in and buy, bale and market byproducts off the farm,” Dynes said.

Grass seed is a big commodity in northeastern Oregon, but after it’s cut, straw remains. Pacific Ag harvested and marketed straw, as well as residual stalks from peas or beans, and baled them for dairy herd feed.

After his mother passed away, Dynes took on the added challenge of helping raise five of his 13 siblings. Those siblings he didn’t help raise have since become felons, which he said created the soft place in his heart for the inmates on work release he hires.

“We do hire a lot of people out of work release,” Dynes said. “They are not necessarily bad people at heart. Sometimes they just need direction and guidance to become very productive contributors to society.”

Sometimes staying on the straight and narrow doesn’t work out, Dynes admitted, but in 20 years he said he has witnessed three success stories of employees who completely turned their lives around.

“That’s my way of giving back for the help I got when I was in need,” Dynes said.

Most of what Wyatt Enterprises collects from the processors is made into feed ingredients for dairy and beef cattle, chickens and dogs.

Dynes said, “Some of the byproduct we deliver directly to customers, the rest we take to our dehydrating facilities and manage it in a dry form.”

Before Pacific Ag and Wyatt Enterprises, crop waste went straight to a feedlot, compost yard or the dump when handling when it became a problem for a farmer. Dynes said there was a real need to start a business in managing the material.

“Piece by piece we structured our business model and it created an industry,” Dynes said.

As food processing increased in the Columbia Basin, it pushed all of the agriculture services like his to step up and become better.

Dynes said, “We are just one piece of the puzzle.”

His goal in building up these companies was to reduce the number of tons of fruits and vegetables taken to the landfill — without any cost to the suppliers.

“I think recycling in all aspects is more successful if it doesn’t cost the person producing the material to recycle,” Dynes said. “I believe that we can develop beneficial secondary uses for all of these agricultural products one way or another.”

“You can make a difference — and it’s the littlest things that make the biggest difference.”

Dynes said he believes all private business benefit from recycling and reducing waste, which is easily demonstrated in agriculture. He said cows, for instance, recycle large volumes of crop byproduct, leaving behind manure that can fertilize crops, all while producing food for humans and pets.

“I personally believe the most viable businesses that help reduce the footprint are the dairies and feeders that are using by-products instead of contemporary purpose-grown crops,” Dynes said.

He’s been involved in agriculture from a very young age, and attended his first year at Blue Mountain Community College on an FFA scholarship. After his freshman year he attended both Blue Mountain and Eastern Oregon University on full-ride academic scholarships, graduating with a 3.9 grade point average while continuing to work full-time at a number of agriculture-related jobs.

His success in school and business is striking in contrast to the life of poverty, neglect and abuse he was raised in until almost 15. When he had no support from his own parents, a friend’s family took him into their home.

“They taught me how to work, be responsible, and no matter what, they taught me that you can make a difference — and it’s the littlest things that make the biggest difference,” Dynes said.

« Comfort in crisis | A President from Pohnpei »