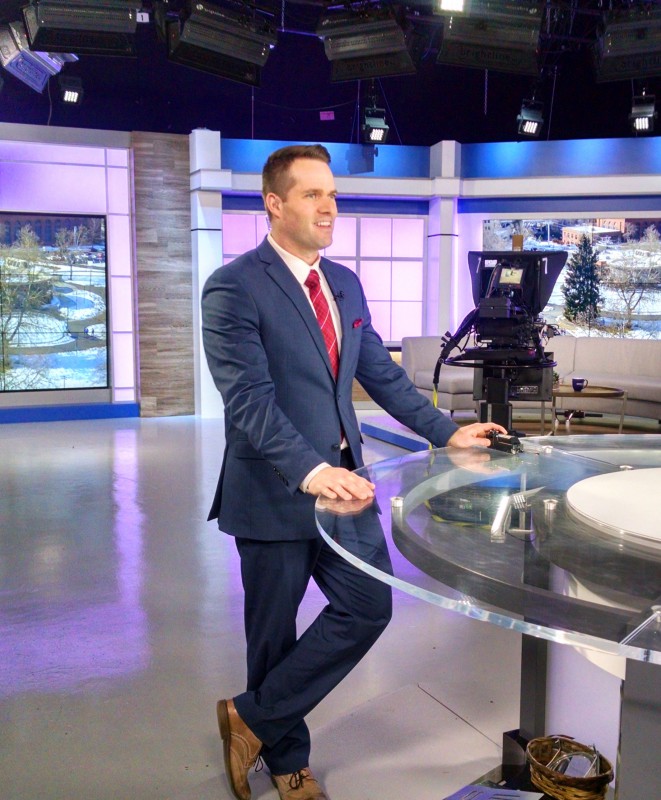 Local news anchor Mark Hanrahan, ’04, finds himself on the frontline of community issues nearly every day.

From behind the evening news desk at KREM in Spokane, he tells viewers the latest happenings at 5, 6, 10 and 11 p.m. each night.

“Journalism offers something new and interesting every day,” Hanrahan said. “It’s a very important job for society and the communities that we work in.”

Recruited to Eastern Oregon University as a quarterback, Hanrahan ended up playing safety during his collegiate career while studying Philosophy, Politics and Economics. But he got his first taste of journalism during an internship in Costa Rica, where he translated Central American news bulletins into English.

After that, he went from KPTV in Portland, to KRTV in Great Falls, Montana, to KOAA in Colorado Springs, then back to Portland for KPTV and KGW. In between, he married fellow Mountaineer Maribell (Vargas) Hanrahan, ’04.

Since Hanrahan joined the station as an anchor in 2015, the couple and their two children have made Spokane their home.

“It’s a very demanding job, so you figure out quickly whether it’s for you or not,” Hanrahan said.  “I worked weekends and all the holidays far from home for many years.”

Holidays also mark annual community involvement for Hanrahan and his colleagues, who coordinate Tom’s Turkey Drive each November to provide hundreds of thousands of meals. He said the station also does a Diaper Drive and connects veterans with pets that need a new home.

Although each day brings new stories to report, Hanrahan said his routine has remained steady since his early days as an intern and beat reporter. He’d pitch stories from the “crime and courts” beat he covered to the producers and news directors at a daily editorial meeting. Then all of the reporters got their assignments and spent the day pursuing their stories, conducting interviews and editing together a segment for the evening news.

“Everybody has this idea of what a journalist or reporter does, but the majority aren’t covering [Washington,] D.C. every day. They’re covering school board or city council decisions that affect the community.”

“It’s a weird thing, because your whole day is working to create about 90 seconds in the newscast,” Hanrahan said. “And if breaking news happens, everything gets tossed out the window.”

As an anchor, Hanrahan said his workdays start at 2:30 p.m. He writes and records teasers for the day’s lead stories and edits scripts for the nightly news. Nowadays he does fewer stories, but Hanrahan said reporting on Gonzaga University basketball, wildfire season in 2018 and more difficult stories like school shootings keep him involved in the process.

“I’ve covered a lot of tragedy over the years, and that never gets easy,” he said. “First and foremost, you’re a human being and then a journalist.”

KREM has been recognized by the city of Spokane for the station’s community outreach. Hanrahan credits his upbringing in Newport with instilling a commitment to give back generously and stay involved in his own neighborhood.

“Everybody has this idea of what a journalist or reporter does, but the majority aren’t covering [Washington,] D.C. every day. They’re covering school board or city council decisions that affect the community,” Hanrahan said.

When he was searching for a career path, internships gave Hanrahan direction, and today he’s grateful to be in a field that brings new surprises and challenges with every day. He said he and his wife are grateful for their time at EOU and fulfilling life that their education equipped them to build.

“It’s gratifying when you’re able to give an answer when somebody reaches out to you,” Hanrahan said. “When you hold people in power accountable or you’re able to get resolution for [an individual] or community as a whole.”