New head baseball coach Mike McInerney will be on the @JBG_Show next Wednesday, Jan. 22 for his first official interview! ⚾️

The live interview will be held at Market Place Fresh Foods at 4:30 pm and is welcome to ALL baseball alums & fans! 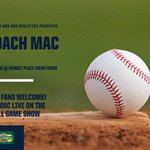 Mr. Insko was named the 12th president of Eastern Oregon University in 2015. A native of eastern Oregon, he grew up on a family farm 35 miles north of La Grande. He earned two degrees from EOU in mathematics and business economics and played intercollegiate basketball for the Mountaineers. He holds a master’s of business administration from the College of William and Mary in Williamsburg, Va.

Under President Insko’s leadership, the university has embraced the motto “Together, it’s possible.” Faculty, staff and students formally adopted EOU’s Values and Principles in 2016 and have integrated them into the daily work and activities of the institution. In 2017, the Board of Trustees approved The Ascent 2029, EOU’s strategic plan that sets the framework for today and tomorrow. The trajectory mapped by The Ascent is aggressive. The transformational goals and key performance indicators are aligned with EOU’s Mission and Core Themes where quality, access, and student success are at the forefront.

EOU has already achieved one of the goals in The Ascent — official designation as Oregon’s Rural University by the Legislature. This designation firmly and unapologetically solidifies EOU’s commitment to rural areas in Oregon and beyond.

Statement on Freedom of Expression

Eastern Oregon University serves our students, our nation, and our world, by being a place where the higher levels of learning are practiced and lived on a daily basis. Education is a process of changing oneself, an enterprise fraught with conflict between old values and new, old ideas and new. Students come to a university to be challenged, and to become, through that process, larger, more capable and wiser. EOU is committed to being a place where the skills of learning, of inquiry, of examination, of debate and reasoning, are modeled, practiced and learned – skills that our graduates will incorporate into their sense of themselves, and will build on and develop throughout the rest of their lives.

1. The right to freedom of expression. When our nation’s founders decided to make explicit the rights necessary for the functioning of their republic, they placed freedom from governmentally imposed religion, freedom of personal religious practice, freedom of speech, freedom of the press, the right to assemble, and the right to demand government action to protect these freedoms in the First Amendment to the U.S. Constitution:
Congress shall make no law respecting an establishment of religion, or prohibiting the free exercise thereof; or abridging the freedom of speech, or of the press; or the right of the people peaceably to assemble, and to petition the Government for a redress of grievances.

2. Civility and freedom of expression. Freedom of expression is fundamental to learning and the development of new ideas in an institution of higher education. It is not the role of the university to protect individuals or groups from offensive speech, but to protect the rights of individuals and groups to express themselves and to contest the expression of others. The necessity of considering radical and unpopular ideas, and of doing so within a framework of civility, is at the heart of the decisions by which the federal courts have enforced the First Amendment. Governments may set reasonable limits on the time, place, and manner of political speech, but generally cannot regulate its content. Within that framework, it is not acceptable to object to an idea because it offends one personally. Ideas must stand or fall by their inherent merit, tested in public debate. The rules of debate and discussion allow any idea to be weighed in the balance of reasoned intellectual inquiry.*

3. Equity and inclusion and freedom of expression. EOU recognizes that some speech risks the climate of inclusivity necessary for equitable educational opportunity. In most circumstances, an inclusive environment is best supported by more rather than less dialogue so that ideas can be aired and addressed. In such dialogue, the university may exercise its own right to contest expression that opposes the institution’s commitment to equity and inclusion.

*Exceptions to the university’s commitment may occur when expression violates the law, for example, in the case of true threats, incitements to violence, defamation, harassment, or confidentiality requirements. Conduct that goes beyond simple expression so as to violate criminal laws or the student conduct code is not protected expression. Additionally, the university may limit the time, place and manner of expression to protect ordinary operations of the institution and safety of the campus community (see the Public Demonstrations Policy).

Getting to know
President Insko

In the fall of 2015, President Insko sat down with our managing editor of The Mountaineer Magazine to share his distinctive experience and approach to ensuring EOU’s success in a new era.