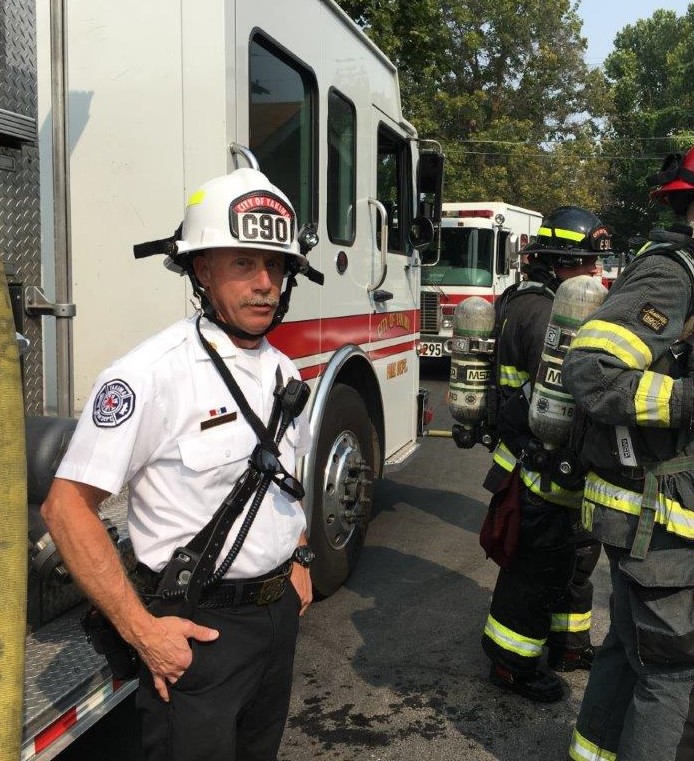 “I was looking at professional development,” Markham said. “To be a chief in a larger department the minimum education requirement listed on job announcements was a bachelor’s degree.”

Not only were other higher level positions in fire service open to him upon completion of his bachelor’s degree, so was the National Fire Academy’s Executive Fire Officer Program in Emmitsburg, Maryland.

“I was looking at professional development, and to be a chief in a larger department the minimum education requirement listed on job announcements was a bachelor’s degree.”

“They had changed the requirements from needing an associate’s degree to a bachelor’s and I had received my degree right before I applied,” he said.

The four-year program entailed two weeks a year onsite in Maryland followed by six months of research on a topic relevant to his department.

“After all is said and done, part of the paper has to either have a policy you drafted or created for your department or other department-related research,” Markham said.

The research culminated in 60-page papers covering all aspects of the topic in great detail. One of his first papers discussed the impacts of budget constraints that led to eliminating positions in the fire service. Another developed a policy around active shooter incidents.

He received his certificate in 2017, and this year he attained that coveted next rung in the fire ladder.

In March Markham became the deputy chief of the Yakima Fire Department’s logistics and support services, and on June 1 he was selected to serve as chief. His new positions includes oversight of 103 firefighters at six stations, as well as a large 9-1-1 center and administrative staff.

Markham said for now his continuing education is on-the-job.

“For the most part I’m focused on learning the functions of a larger fire department and maintaining good communications among all shifts,” he said. “I’m getting an opportunity to meet everybody and put faces to names.”

« Centerstage Seamstress | Running away with it »