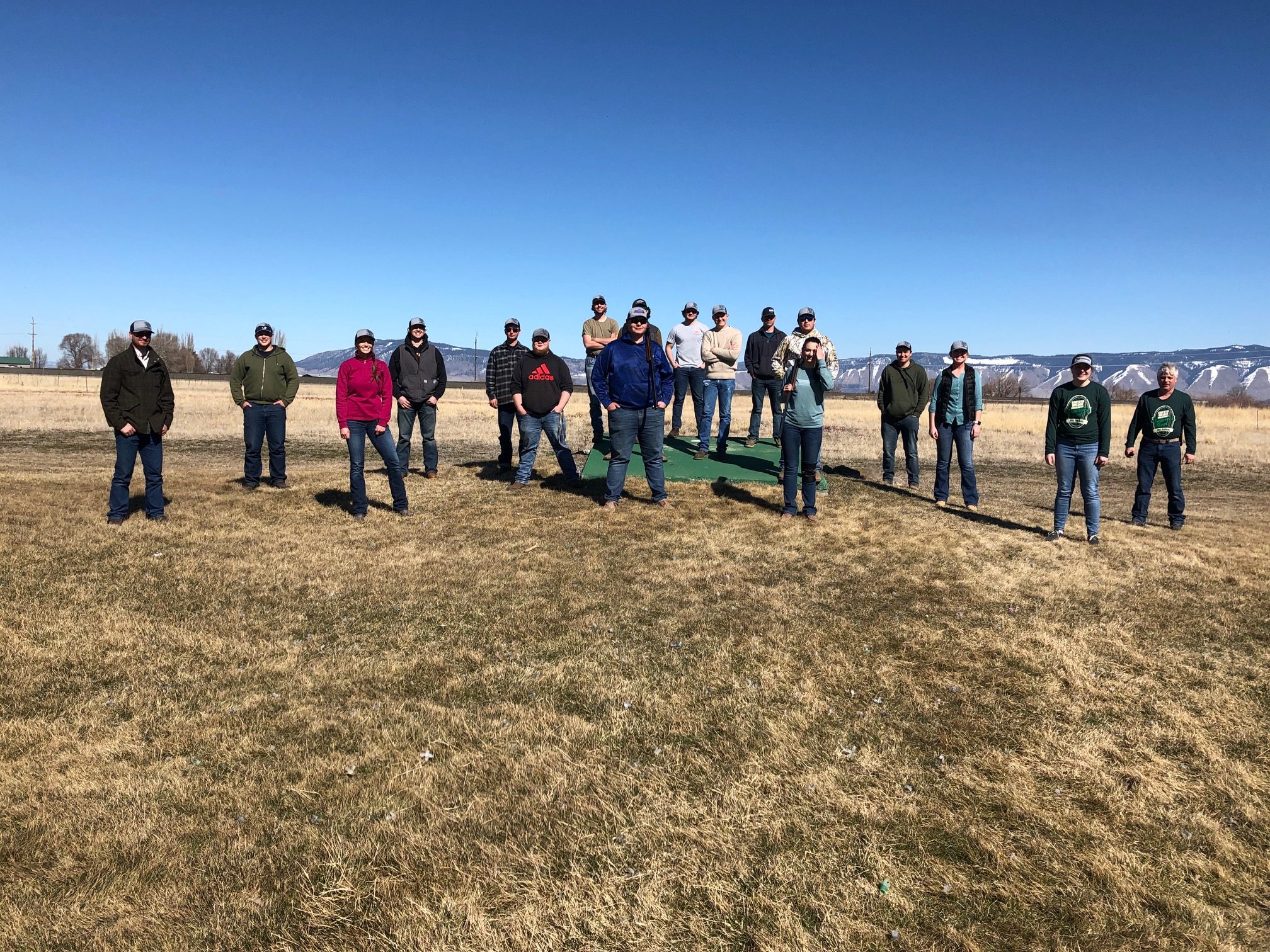 We are excited to host the 4th Annual Shamrock Shoot at the La Grande Gun Club. Here is a short list of important reminders

Register here for the Shamrock Shoot

Pre-registration is strongly encouraged to assist with check in and squadding. All registration fees will be collected the day of the shoot.  The La Grande Gun Club accepts, cash, card or check.  Please make checks payable to EOU Trapshooting.

Athletes may register the day of the event until 9:00 a.m. at the check-in window.  Day-of registrants will be squadded in the final group.

The EOU Trapshooting program invites all participants, coaches and family members to take advantage of their visit to La Grande by taking part in a campus tour.

Don’t forget to order a shirt.

Competition targets are included with the participation fee. All athletes will shoot 100 targets — 50 in each session — from the 16-yard line.

Please use your high school average, ATA, PITA, WRITA, YESS,  whichever is highest or a Coach’s Known Ability if none of the previous apply.

All athletes will participate in the “High Gun” (highest number of targets hit) competitions.

In the event of a tie, a shoot-off will occur. The athletes involved will draw a number to determine placement in a squad. All athletes will shoot a miss and out from the 16-yard line to determine a winner. Varsity level shooters will shoot off from the 20 yard line.

All coaches are invited to enter the 100 Bird Coaches event.  All coaches will shoot on the same squads at the end of the student competition. The top score will win a trophy. Coaches scores will not be included in the team event scores.

Athletes will only be able to shoot during their scheduled time on their squad’s designated field(s). It is possible that final remaining members of a team may be combined with another partial team to create a full squad of participants to maximize time allotment. Teams should arrive at least one hour before their scheduled time to allow check-in, squadding and set-up.

Athletes will shoot in two sessions. After the starting time for the event, all starting and completion times are estimated. It is important to be prepared to shoot immediately after the previous squad completes their round. All late registrants will be squadded to the final squads.

Coaches/participants can make squadding requests by emailing kshorts@eou.edu prior to March 5. Athletes not on a full squad will be combined with other incomplete squads. If a student-athlete does not report to the assigned trap by the scheduled time, the student-athlete must be moved to the final squad.

Scorekeepers will be provided by the EOU Trapshooting Program for the event. Event staff scoring decisions are final.

Scores are recorded on the pre-squadded scoring sheet and tallied in the clubhouse. Scores will be posted on monitors if available and or club house display board. Scores are recounted by event officials to ensure accuracy. Mismarked or illegible scoring sheets are considered a ‘lost target’ by event staff. The only time a round score may be disputed is on the field immediately after a scorer has announced a lost target. All scores are final upon completion of the post.

The following awards will be presented for event competition:

Patches will be awarded to those student-athletes that achieve 25, 50, 75 or 100 straight at the event. Event practice rounds are not eligible.

Due to high participation levels, limited practice rounds will be available on the day of the event. The La Grande Gun Club will be open Friday, March 11 from 3 to 6 p.m. for practice rounds and Saturday, March 12 from 7:00 to 8:30 a.m. The cost for each practice round is $5.00. Saturday morning practice will be extremely limited.  All shooters must practice prior to 8:30 am.

All participating athletes and their families can purchase an official event T-shirt. Pre-orders are strongly recommended as a limited supply of T-shirts will be available for purchase at the event. Shirts can be ordered for all participants on the registration form for $20.00 each. Shirt sizes available are adult unisex from Small to 2XL. Additional orders can be emailed to kshorts@eou.edu.

Athletes are required to check in at the registration tables located in the clubhouse by 8 a.m. on the day of the event. The check-in table will also be available on Friday, March 11 after 3 p.m.

Safety is our first priority for this event. The EOU Trapshooting Program will have Master Range Safety Officers (RSOs) at the event to oversee athlete and spectator safety. Everyone is expected to comply with all instructions received by the RSOs. In the event of a safety issue or concerns, notify a Master RSO. Master RSOs have final say in all safety matters.

Suspension of Competition Due to Hazardous Weather Conditions

In the event of inclement weather before or during the tournament, EOU will make safety the first priority. If severe weather is forecast, and time permits, all participants will shoot a lesser number of targets as determined by the event committee. If time permits, all participants will shoot more targets until the prescribed number of targets has been shot. If weather does not permit completion of the shooting, the team with the highest score of the round(s) every shooter was able to complete, will be deemed the winner of that competition.

We ask all participants and spectators to be dressed appropriately for all weather types. Please check local weather forecasts and come prepared to shoot in all weather conditions.

Coaches should bring emergency contact information for all of their athletes for reference if needed.

To avoid lost or misplaced shotguns, we strongly suggest that student-athletes affix a label that includes the name, school team and contact information to their shotgun. The EOU Trapshooting Program and La Grande Gun Club will not be responsible for any missing firearms.

All athletes are responsible for providing their own ammunition, which must adhere to gun club policies. Approved ammunition includes low base 7.5 or 8 target loads.

Voice-released targets will be used on all fields.

Any and all spectators are welcome to attend the event. Team set-ups including tents and chairs are allowed BEHIND the field sidewalk.

Free parking is available to all participants.

Food and non-alcoholic beverages can be brought to the event or purchased in the gun club and consumed in spectator areas. The EOU Trapshooting Club will be selling a variety of breakfast and lunch items on the day of the event.

Alcohol consumption is not allowed by any athlete, coach, parent or spectator at any time during the event or awards ceremony.

Friendly, obedient and socialized pets are permitted at the event. Pet owners who bring their pet do so at their own risk and agree to accept full responsibility for any physical damage or personal injury caused by the owner’s pet or to the pet while on event property. At all times, pets must be kept on a 6-foot or shorter leash while on event property. As a responsible pet owner, please clean up after your pet.

For safety reasons, the owner of any pet showing aggression or disruptive behavior may be asked at any time to remove the animal from the event.