The Joseph Branch rail-with-trail vision was put forward by citizens from Union and Wallowa counties suggesting the formation of the Oregon Wallowa and Union Railway Company during discussions in 2000 and 2001.  The “Save Wallowa & Union County’s Railway” committee’s primary goal was the preservation of the rail line between the towns of Elgin and Joseph.

The two county boards of commissioners formed an ORS 190 organization, The Wallowa Union Railroad Authority (WURA), to purchase the rail line.  WURA gained ownership of the line in 2001 and successfully retired the substantial debt in 2013, securing a significant community asset worth nearly $10,000,000.

The Friends of the Joseph Branch, a 501(c)(3)organization formed in 2002, operates the Eagle Cap Excursion train from the new Elgin depot, finished in 2013, to the Minam crossing.  In 2013 a group of citizens approached the WURA board of directors to encourage consideration of building a multi-use recreational trail on the railroad’s right of way.  The WURA board of directors and a citizen group approached the Oregon Parks and Recreation Commission (OPRC) in April 2013 to request the support of the agency in determining the feasibility of an Elgin to Joseph 63 mile rail-with-trail project.  The request of OPRC recognized most rail-trails are the result of a cooperative effort between an active citizen group, a responsive public agency, and a supportive community all of whom share a vision for the trail.

For purposes of advancing the public discussion of the possibility of a Joseph Branch Rail-with-Trail a Memorandum of Understanding was agreed to by Wallowa Union Railroad Authority, Oregon Parks and Recreation Department, and Eastern Oregon University. 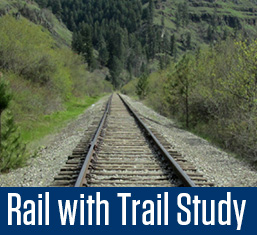