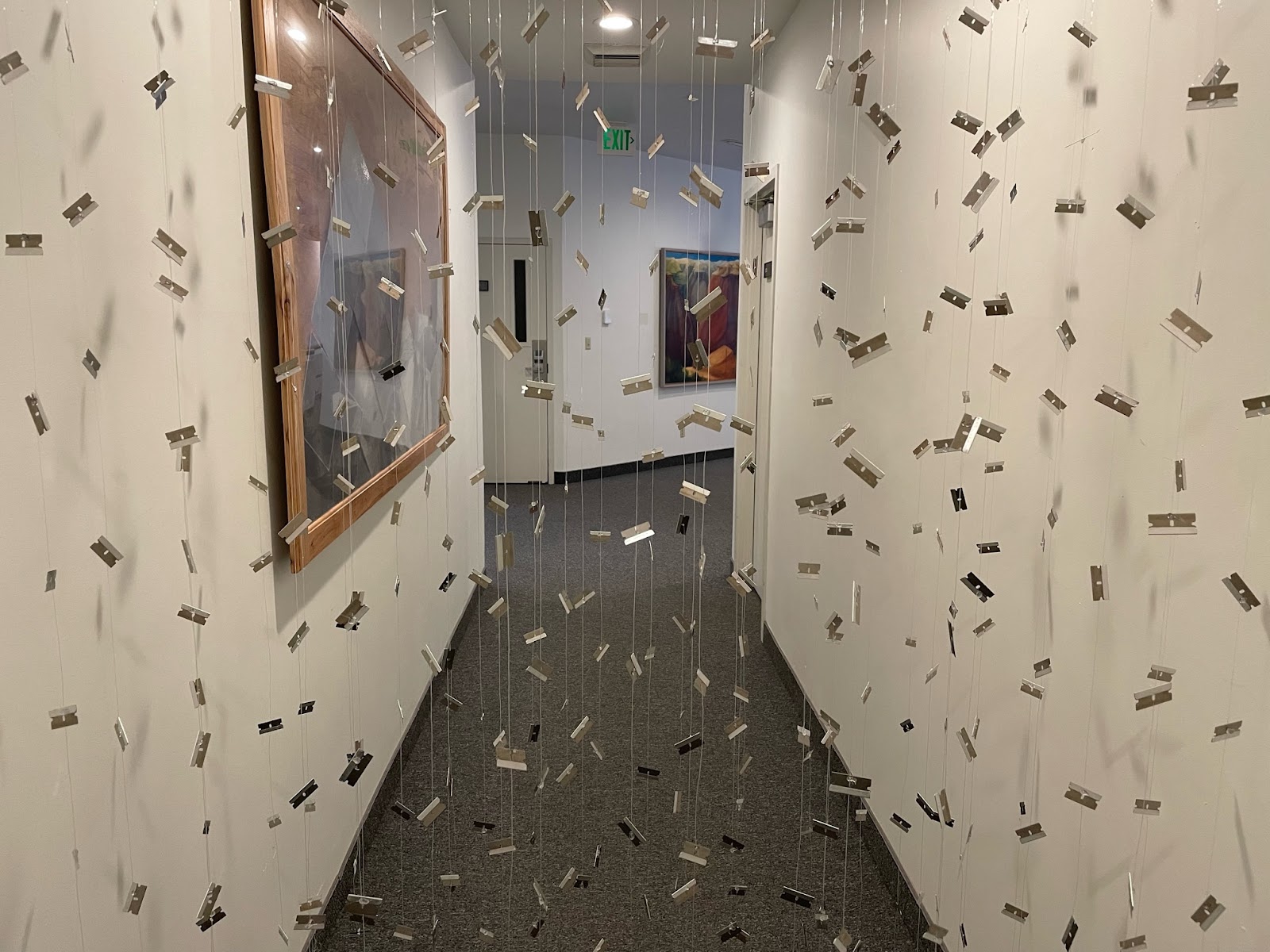 There can be power in perspective, especially when it comes to heavy or somber subjects. As recent projects at Eastern Oregon University have shown, this is especially relevant when it comes to advocacy and art. Sexual Assault Awareness Month brought with it a host of artistic projects and presentations, ranging from a rock painting night to Denim Day participation, all aimed to open the minds of campus community and usher in more support and awareness. One EOU student, however, not only used art as a way of spreading awareness, but to visually capture what it meant to survivor and recover from sexual assault.

EOU Art Student Jessica Hitzman created “The Only Through is Forward” piece, a collection of 638 razor blades suspended by fishing line at varying intervals. According to Hitzman the blades represent the average number of women that report sexual assault awareness every day in the United States, telling The Voice, “Friends, family, it’s impossible to encounter a woman these days who doesn’t either know someone or had that experience herself.”

A survivor of sexual assault herself, and from the days before popular support and awareness movements online, Hitzman created the piece not just as a representation of the rate and scale of sexual crime against women, but as a physical take on the personal struggles in healing and recovering from trauma, explaining to The Voice:

“I feel like, walking through this razor blade curtain, it’s kind of what it’s like to be a survivor…even when you think you’re doing better, you have to cross more hurdles and it’s something that never really leaves you, it’s always there.”

The choice of razors was meant to exacerbate this feeling of perpetual struggle on the road to recovery, in addition to being a familiar and workable material in the art department. Each one represents a victim of sexual assault and their corresponding pain but is also a physical object that can easily hurt anyone that step through the hallway. “I wanted something that people would be uncomfortable to walkthrough because dealing with sexual assault is uncomfortable. So, razor blades sprung to mind because they can actually do physical damage to an individual,” Hitzman said.

While a convenient and powerful piece to close out sexual assault awareness month, “The Only Way Through is Forward” was done independently for an EOU art class. According to Hitzman, this is the first major piece she’s created related to sexual assault awareness, though she hopes to explore the idea more as she continues to recover from her own experiences.

The piece itself was hung up in an upstairs back hallway of Loso Hall on April 18th with several other pieces from the class, taking about six hours in total. Due to liability concerns, it was taken down after 24 hours. Despite its short-lived nature, Hitzman said she received positive feedback both from her art class and on social media, telling The Voice,

“Everyone in the class tried to interpret it without explanation and were like ‘maybe it has something to do with chronic pain.’ When I actually explained it, everyone was like ‘oh, yeah, that’s pretty powerful.’ So, it was overall pretty well received aside from the whole danger of it.”

All danger aside, the piece still serves as striking visual representation of both ongoing sexual assault issues nation wide, and the personal struggles of those who have made through. As best put by Hitzman, “It’s important to end violence toward women. And really that’s it. I mean, violence toward women is a huge problem that gets ignored, a lot.”

« EOU Through the Eyes of An International Student | NEW Student Resource Lounge! »