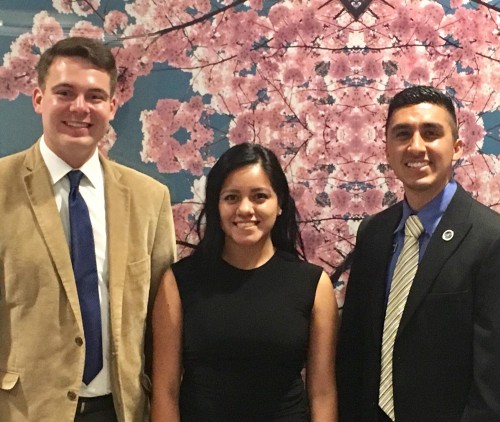 Washington, DC – June 22, 2017 Every year, the Associated Students of Eastern Oregon University (ASEOU) elects new leadership, but in 2017 the transitioning student leaders started their administration in the nation’s capital at the Presidential Leadership Summit hosted by the National Campus Leadership Council.

“I learned that sexual assault is bigger than what I thought, and I want to raise awareness this upcoming year,” said Bedolla. “I also learned that we have to stand for those who feel voiceless.”

Rangel said the NCLC summit was an important experience, one he wishes he had been able to have prior to taking office. Meeting student body presidents from around the country led to an important exchange of resources.

“The room was full of individuals from different institutions who have the same ideas and goals, except in different ways,” Rangel said. “When you come together, there’s so much sharing of information, so much sharing of knowledge, the experience is awesome, and gets you connected with different resources.”

Rangel and Bedolla met EOU alumnus Evan Bryan, who served as ASEOU president in 2013-2014 and recently completed his master’s degree at George Washington University. At three current and former presidents, ASEOU boasted the most representatives of any school in attendance.

“These types of conferences are so important for student leaders from around the country to meet, share ideas and learn from each other in our nation’s capital,” Bryan said.

Rangel and Bedolla returned to La Grande with new ideas and tools to put into practice throughout the coming year.

“I learned that there are many resources we can use to increase our numbers in voter registrations, incoming students, retention, and student involvement,” Bedolla said. “Those who have been there before us, as well as other folks we have met, are always willing to help the student body be successful.”