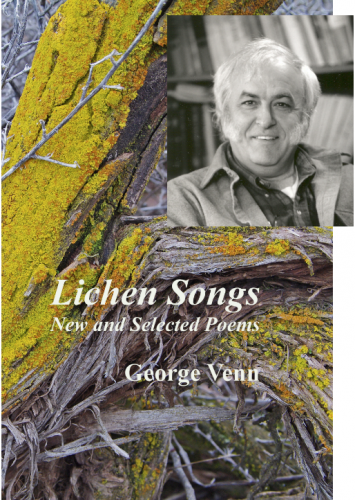 Venn, a literary historian and former writer-in-residence at EOU, partnered with EOU’s Pierce Library to share excerpts from “Lichen Songs.” The event begins at 7 p.m. in the reading room and will showcases the collection’s range, which includes selections from three previous books, as well as new and previously uncollected poems.

John Witte, editor emeritus of “Northwest Review,” called the publication, “a long-awaited and highly recommended collection.” Fifty-one poems in the 127-page volume are reprinted from Venn’s earlier books: “Off the Main Road” (1978), “Marking the Magic Circle” (1987) and “West of Paradise” (1999).

The title comes from a poem called, “The Lichen Family Story,” that is featured at the Oregon Zoo. Venn said the collection, currently nominated for a Pulitzer Prize, serves as a companion to last year’s “Beaver’s Fire,” which compiled his regional and historical writing.

The Oregonian called Venn “one of the best-known and most respected poets in the state.” Prior to retiring in 2002 as EOU’s Distinguished Teaching Faculty, Venn garnered numerous awards including a Pushcart Prize, the Andres Berger Award, an Oregon book award and the Stewart Holbrook Award.

In 2005, the Oregon Cultural Heritage Commission and Oregon State Library chose Venn’s collection “Marking the Magic Circle” as one of the “100 Best Oregon Books (1800-2000).” His second collection of poems, “West of Paradise,” was a finalist for an Oregon Book Award and both the Oregon State Library and Poetry Northwest selected it for their meritorious booklists in 2009. Other works include “Darkroom Soldier,” a collaboration with the late Fred Hill, its companion volume, “Fred Hill: A Photographer’s Life,” and “Keeping the Swarm,” a collection of personal essays.

Venn will hold additional readings throughout the region. Learn more at georgevenn.com.