True story of “We Happy Few” 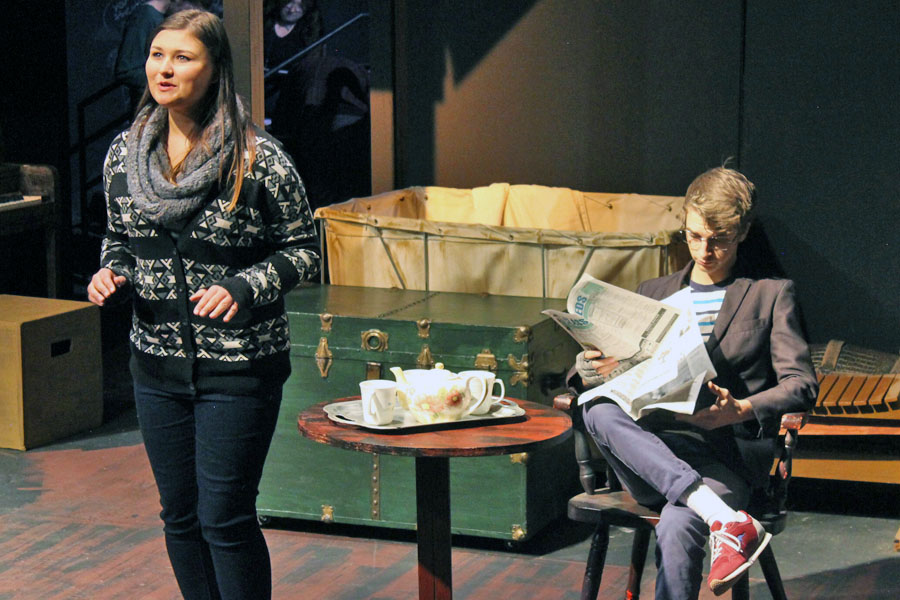 Photos by Kenn Wheeler / Danielle DeVall and Liam Bloodgood rehearse a scene from “We Happy Few,” the true-life story of the Osiris Players opening at EOU November 10. DeVall, of Washougal, is cast as Ivy Wiliams, and Bloodgood, of La Grande, portrays Reggie Pelmet. Both are theatre majors at the university. 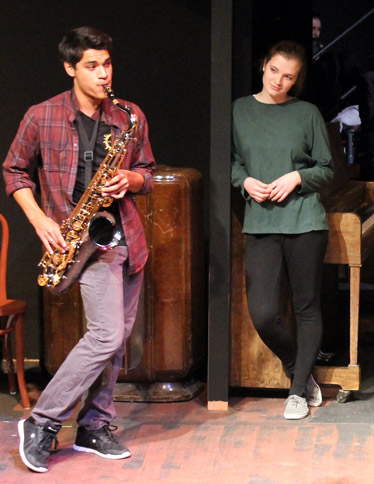 Theatre major Miguel Vasquez, of Hood River, serenades Heidi Gerlach, who is cast as Hetty Oak, founder of the all-female British acting troupe. Vasquez portrays Joseph Rosenbaum, the son of another actress in the group. Gerlach is from Eugene and also majoring in theatre.

While the men are fighting Hitler and the bombs are blitzing London, seven mismatched individuals from entirely different social backgrounds embark on an adventure together.

Crammed into the back of their battered 1920’s Rolls-Royce, the “girls only” theatre company known as the Osiris Players takes Shakespeare’s plays on the road to the school-halls and village greens of culture-starved Britain.

Amongst the played-out Shakespeare, they are forced to discover what life is like without men, and eventually, how they must survive when they only have each other.

Written by Imogen Stubbs, “We Happy Few” premiered in West End in 2004 and was described by the Daily Express as “By far and away the funniest and saddest backstage play for half a century.”

Mike Heather, associate professor of theatre, is directing the cast of 13.

“This play lends itself to some great roles for seven women ­– all EOU students – who have stepped up with dynamic performances,” Heather said. “There is some impressive stuff happening on stage with this company of players, and I’m excited for audiences to experience this inspiring and true story.”

Tickets are free for EOU students, $15 for general admission and $10 for members of the military, senior citizens and students from other schools. Purchase tickets online at ticketpeak.com.