Twice is nice for EOU grads 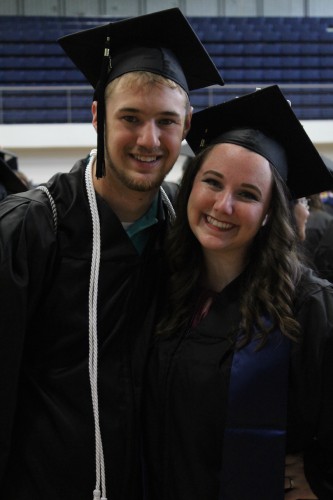 Construction on the Stadium-Track Project has relocated the event, which usually takes place in Community Stadium, to Quinn Coliseum. The indoor space calls for two smaller ceremonies, allowing the families and friends of every graduate to participate in this auspicious day.

EOU Trustee Bobbie Conner will deliver the keynote speech at both ceremonies, addressing nearly 200 graduates at each.

“I am delighted to serve in this role at EOU’s commencement,” Conner said. “My mother is an alumna and I have fond memories of growing up on campus.”

Conner serves as vice chair of the university’s governing board and has worked as director of the Tamástslikt Cultural Institute since 1998. She actively mentors young scholars in tribal cultural preservation, and is a well-published writer on the topic. In 2007, she received the Ecotrust Indigenous Leadership Award for her work representing the Confederated Tribes of the Umatilla Indian Reservation (CTUIR), and earlier this year she joined the Oregon Community Foundation Board.

“My ancestors and all the generations of my family have revered the Grande Ronde Valley and the home of EOU as it is a magnificent place of abundance to our Cayuse people,” she said.

OHSU holds its 34th Annual Convocation and Awards Ceremony at 10 a.m., June 15 in McKenzie Theatre, where nursing students are presented with awards and nursing pins. A reception, hosted by the OHSU School of Nursing faculty and staff, will follow.

Online and onsite students who’ve completed their degrees at one of EOU’s 11 regional centers or through online offerings will honor their achievements from 5 to 7 p.m., June 15 in the Gilbert Center. A livestream of the event is available at livestream.com/eou/special.

All 375 graduates will convene June 16 for their respective ceremonies in Quinn Coliseum. No tickets are necessary to attend and seating is on a first-come, first-served basis. Free parking is available all day in campus lots, excluding reserved spaces.

Additional ceremony information is available at eou.edu/commenement, or through contacting the Registrar’s Office at commencement@eou.edu or 541-962-3607.