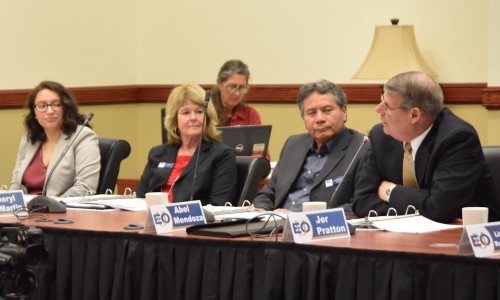 April 12, 2018 La Grande, Ore. — Trustees approved a 3.3 percent tuition increase for Eastern Oregon University students during its regular meeting today in La Grande. The rate change boils down to an increase of about $75 per term for full-time, on-campus residents starting in fall 2018.

Trustee Richard Chaves said he was pleased tuition rates remain below other state institutions and that EOU continues to serve as a “best value” for Oregon residents. EOU continues to hold increases to a minimum having been one of only two public universities in the state to keep tuition and fee increases below 5 percent. Trustees noted the continued need for state investment in higher education if tuition is to remain affordable.

“I hope at some point we get to go without tuition increases altogether,” said Chair David Nelson. “Legislators have to realize that even a 5 percent increase is too much to just pass on to students.”

The board then approved slight increases in room and board fees to balance immediate building maintenance, as well as catering costs and additional days spent on-campus.

Restoration of the historic Grand Staircase accounts for about a quarter of the proposed $12.5 million budget for phase two of renovations to Inlow Hall. The project includes additional classroom and office space, seismic modifications and landscaping the building’s approach to meet the architect’s original outline.

“The Grand Staircase is so unique and so beautiful,” Trustee Cheryl Martin said. “We need to make sure it’s more visible and accessible for people.”

Trustees also approved an initial proposal for expansion of EOU’s residence halls aimed at accommodating up to 100 more students on-campus by 2023. Expanded capacity aligns with the institution’s goals for growth while supporting student success. Trustees will revisit the proposal in October.

Brand-new facilities are in the works, too, thanks to a $9 million budget allocation from the Oregon legislature. The funds, in the form of lottery bonds to be sold in 2019, will kick-start construction of a 66,000-square-foot, multi-use Fieldhouse on campus – the first new state-funded building at EOU in 30 years.

“I’m very proud of our representation in Salem,” Trustee Roberta Conner said. “We’ve made considerable strides regarding our visibility as an institution.”

During the February session, lawmakers voted to officially designate EOU as Oregon’s Rural University. Validating the institution’s identity in this way promises additional funding opportunities, a clearly defined role, and enhanced potential for outreach and engagement with rural communities.

“Our proactive approach with this bill allowed us to really tell our story at the legislature,” Vice President for University Advancement Tim Seydel said. “Serving rural areas is part of our mission – it’s part of why we were founded – and this was a chance to embrace that and make the most of it.”

Trustees continued their evaluation of a partnership with an online program management company to extend the reach of EOU’s online education offerings. President Tom Insko updated the board on recent feedback from the campus community and next steps in the evaluation process.

The board returns for its final meeting of the academic year on May 24.

Full meeting materials are available at eou.edu/governance, and the entirety of the meeting is posted for viewing at livestream.com/eou/governance.