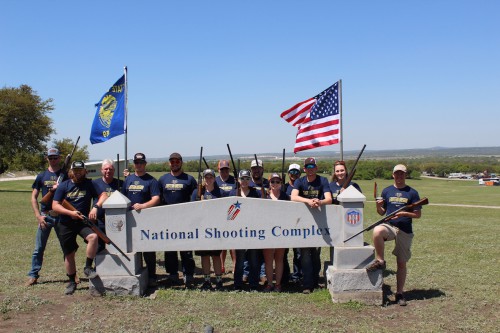 May 10, 2018 LA GRANDE, Ore. –  Members of the Eastern Oregon University Trap Club became the first to represent an Oregon school at the ACUI Collegiate National Championships in March.

“Our best performance was in the Sporting Clays event, where EOU placed sixth in our division,” said club advisor John Shorts. “What makes this ranking really impressive is that three of our students had only tried this event the day before and two of our team members used pump action shotguns, which is a major disadvantage in this event.”

“It was a great new experience and I really enjoyed being there with the team,” Vining said. “We had a lot of fun, and I can’t wait to go again next year.”

The club held fundraisers throughout the year to pay for travel and registration expenses. Local businesses supported their efforts, and they also received funds from the EOU Foundation and through ASEOU Senate allocations.

“This experience has encouraged our team to work harder and return as stronger competitors next year,” Shorts said. “We plan on having a full team for all four events and competing in the all-around title.”

He said new team members bring impressive scores that will continue to propel the club’s performance. Trap Club makes its next competition appearance in September at the Upper West Coast Conference Championship in Boise.

“I am really proud of this group of students,” Shorts said. “They worked hard to get here and proved that their shooting skills are as good as, if not better than, many other universities in the nation.”