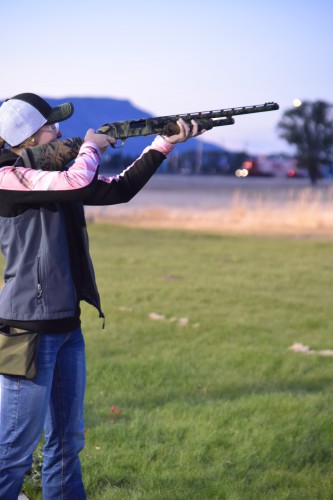 Jan 14, 2018 La Grande, Ore. — Clay targets are set to smash this St. Patrick’s Day as trapshooters of all ages set their sights on the end of the rainbow at the first ever Shamrock Shoot.

Eastern Oregon University’s Trapshooting Club will host the event March 17 at the La Grande Gun Club as part of its fundraising and outreach efforts. EOU senior Codie Lagao said open tournaments like this one are a highlight of Trap Club.

“It gives opportunities for students to learn how to shoot a gun for the first time and interact with community members,” she said. “The club also provides a fun and positive atmosphere that gives students a break between classes where they interact with new people.”

Lagao, an agricultural science major from Baker City, has been shooting since she was a child, but only joined Trap Club this fall. She’s taken a lead role in preparing for the inaugural Shamrock Shoot, alongside coach John Shorts.

“This event is a big deal for our club and helps us in more ways than one,” Lagao said. “The Shamrock Shoot promotes the opportunities that our club has to offer, and raises funds so our competition team can travel to nationals. It’ll also spread the word that we have women shooters in this sport and hopefully spark more interest.”

EOU’s Trap Club has become a model of the thriving university community in La Grande, inviting students of all ages, backgrounds, identities and skill levels to, literally, give it a shot. The Shamrock Shoot extends that mission of inclusion to the wider community.

The field of competition is open to students in grades six to twelve, and promises awards for top performers in a range of categories. Shorts anticipates significant participation from high school students in particular, and the club is prepared to welcome teens to La Grande and EOU.

“It’s be a great opportunity to talk with prospective students and show them what EOU has to offer,” Lagao said. “Visiting teams from Oregon and other states will have a chance to get to know La Grande and our community. Plus, it is a great opportunity for the community to come out and see what trapshooting is all about.”

Competition categories for parents and coaches point to the all-out, open-door attitude prevalent in Trap Club. Spectators are welcome, and campus tours will be available for visiting students. The Trap Club will also host special games and practice rounds Friday, March 16 at the La Grande Gun Club.

“I hope everyone who participates makes connections with other competitors, has a great time shooting, learns more about the EOU Trap Club, and sees that girls shoot in the field of trap too!” Lagao said.

Details and registration information are available online at eou.edu/shamrock-shoot. Registration costs $35 per participant before March 9, and $40 after that. T-shirts are available for pre-order and at the event. Checks payable to EOU Trap Club.

« EOU among best in the nation | EOU cultivates regional leaders »