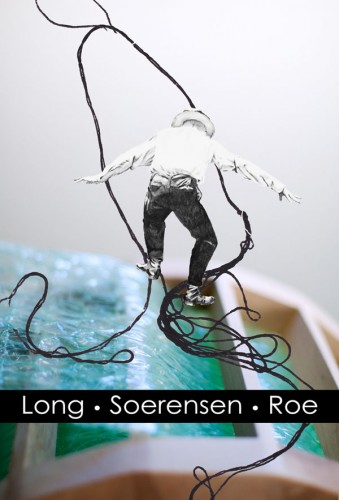 The show will open with a reception for the artists at 6 p.m. April 5 and continue through April 19. Works in mixed media, prints and drawings will be on display.

James Long is a non-traditional student who began his academic career at Boise State University in 1995. Though he also enjoys painting and digital media, his true passion is drawing with graphite on paper. Many of his conceptual influences involve familial heritage, cultural identity and societal institutions.

The body of work Long will be showing began as collages of 19th and 20th century photographs. Through a process of positioning selected elements of two or more photos, such as a daredevil perched at the top of an urban high rise and a sober-faced immigrant, Long is able to craft new situations which explore facets of human nature including hope, disappointment, jealousy and tenacity. Through the black and white of graphite and paper, he presents contrasting subject matter both literally and figuratively.

Christina Roe is originally from Kodiak, Alaska, and she draws much of her inspiration from the natural landscape. Though well-trained in representational art, her new body of work focuses mainly on formal concepts of line quality, space and texture.

Roe’s work explores intangible ideas of time and thought through non-traditional drawing. Instead of providing a visual representation of these concepts, her drawings seek to capture their reflections in a physical, tangible way. Through materials such as thread and string, chosen specifically for the line quality they possess, she is able to draw images onto a grounded surface, which evolve into their own environments and ask viewers to question reality and perception.

Henrik Soerensen grew up in Denmark and is currently making work that is inspired by and questions our culturally-formed patterns. Soerensen concentrates on sculpture and his work satisfies, as well as questions, his fascination with the crafted object. He is especially interested in how a particular color or found object can present a narrative possibility or an altered perception of everyday life.

His fascination with the process of making, along with a background as a professional chef, fosters his interest in the universal function of objects across cultures. His sculptural installations include the use of found objects combined with painstakingly crafted elements of various materials composed in ambiguous compositions.

“Despite the wide range of media used by Long, Roe and Soerensen, there is a certain chaos that all three artists rely upon in their respective processes,” said Cory Peeke, Nightingale Gallery director. “As a cohesive whole, ‘Transposition’ illustrates through both 2D and 3D space how the positioning of disparate elements, shapes, or concepts impacts the relevance of an idea.”

Nightingale Gallery is located in Loso Hall. Gallery hours are 11 a.m. to 4 p.m., Monday through Friday.  For more information visit www.eou.edu/art/nightingale-gallery or follow the gallery on Facebook.