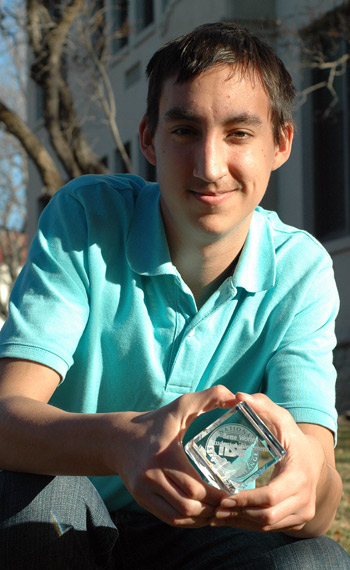 Dale Tovar, an 18-year-old EOU senior, is the recipient of the Bette Worley Student Achievement Award from the National Student Exchange.

LA GRANDE, Ore. (EOU) – One of the youngest students preparing to graduate from Eastern Oregon University this year is making an impression with his high-level commitment to music education.

Dale Tovar is the recipient of the Bette Worley Student Achievement Award from the National Student Exchange, a study away program that allowed him to complete his junior year at the University of Utah in Salt Lake City last year.

Janet Camp, NSE coordinator at EOU, nominated Tovar for the award. He was selected out of more than 2,000 students placed in the program annually.

“Dale was nominated because of his amazing talent,” Camp said. “He is a strong musician, especially for his age.”

At 17, Tovar auditioned and was placed with the University of Utah’s graduate-level jazz combo and performed with them throughout his time on exchange. At EOU he is a member of the group 45th Parallel and just returned from a concert tour with the music department.

Tovar used his time at Utah to take as many advanced music courses as he could, earning a solid 4.0 all the way. He also conducted music theory research and was encouraged to submit a proposal to the West Coast Conference on Music Theory and Analysis.

Not only was his proposal accepted, Tovar was one of just two undergraduate students invited to present at the conference held in Salt Lake City last March. His research on “Octatonicism and Embedded Interval Cycles in Benjamin Britten’s Noctural After John Downland” will be published soon.

Tovar will be formally recognized at the NSE’s Annual Placement Conference the first week of March. He received a $500 stipend and an engraved glass paperweight, which will be added to his growing collection of accolades. Beyond the physical tokens, the award signifies something much more to this soon-to-be college graduate.

“It’s a meaningful achievement, because it reflects all I accomplished in that year,” Tovar said. “I had a lot of opportunities to meet some of the best music theorists in the field and am close with them now.”

Those connections could make a difference when Tovar is applying to graduate school, and he is already actively interviewing at institutions around the country.

Since returning to EOU in the fall, Tovar, now 18, is focusing on finishing his senior thesis and the remaining general education credits needed to complete his bachelor’s in music in June.

When asked what his goals are after graduate school, Tovar said right now he wants to be a professor and theorist who publishes and reviews work. He admits he changes his mind a lot – as most teenagers will – but his passion for music remains unwavering.