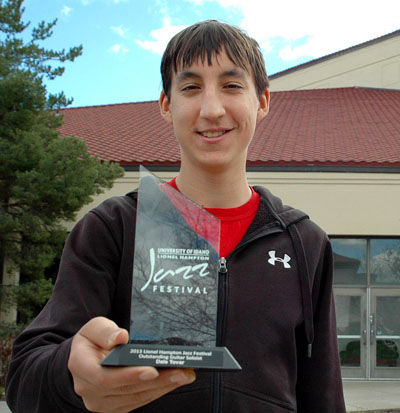 Dale Tovar with his Lionel Hampton Jazz Festival trophy. The 16-year-old is a sophomore music student at EOU.

LA GRANDE, Ore. (EOU) – In many ways Dale Tovar is a regular teenager, but a recent appearance at the 2013 Lionel Hampton Jazz Festival substantiated a musical ability that exceeds his age.

Using a signature economy picking style, Tovar’s deft fingers laid out “Lady Bird” by Tadley Dameron, and “I Remember Clifford” by Benny Golson, for the audience and judges.

The performance garnered him the award for Outstanding Guitar Soloist in the University Division at the event in Moscow, Idaho in February.

In a sense, the honor is symbolic of Tovar’s progression from high school to college. It is the first award the 16-year-old has received since becoming a sophomore at Eastern Oregon University.

The soft-spoken guitarist knew his performance had gone well when a special invitation arrived.

“After the solo contest I was asked to play with Hamp’s Club,” Tovar said, “being invited as a member [of Hamp’s Club] was the award in my mind.”

The club is comprised of award-winners from the festival who join forces for a final performance the last night of the event. While Tovar’s departure schedule didn’t allow him to participate, he was honored just the same.

When the actual trophy arrived a few weeks later, Matt Cooper, professor of music at EOU, had the privilege of presenting it to him as a surprise.

“Dale is an outstanding young guitarist who plays fluently over some of the most difficult jazz tunes and chord changes,” Cooper said. “His ear and grasp of theory, and ability to quickly assimilate new material and incorporate it into his improvisations is stunning.”

It was Tovar’s older brother who sparked an interest in playing brass with the La Grande High School Jazz Band, but the first instrument he ever picked up was the violin.

Tovar returned to playing strings about four years ago, only this time it was the guitar and he excels in classical, seven-string jazz and eight-string electric.

Academically speaking, Tovar is currently the youngest person admitted to EOU as a full-time student. He has been taking college classes for the past two years and maintains a 3.96 GPA. Being homeschooled by his mother, Lyn Tovar, is what he believes prepared him to begin advanced study early.

By the time he turned 15, Tovar had already earned his high school diploma and completed all the college requirements in music theory, musicianship and pedagogy. Now he is on track to receive a bachelor’s of music from EOU in 2015.

While he holds these definite distinctions, Tovar still enjoys jamming with friends in their band, The Blue Shell, playing video games and other normal teenage diversions.

Walking through the music department in Loso Hall, trophy in hand, several of Tovar’s peers called out with words of congratulations. Next fall he will head to the University of Utah on National Student Exchange and enroll exclusively in music courses before returning to EOU for his senior year. 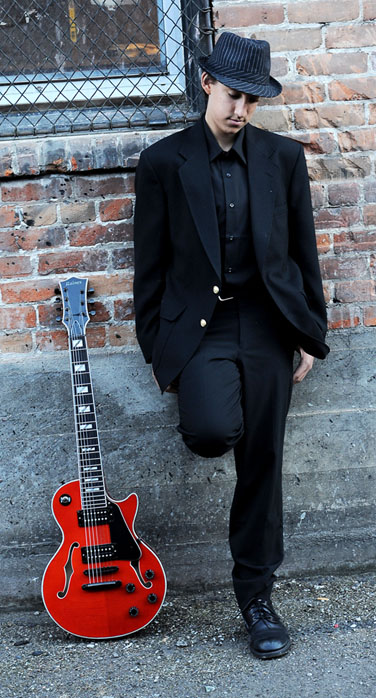 Submitted photo / Next fall Tovar will head to the University of Utah on National Student Exchange and enroll exclusively in music courses before returning to EOU for his senior year.

Leaving home will be a big step for Tovar and his parents. His father, Anthony Tovar, has enjoyed close proximity as a member of EOU’s faculty. Though the courses he teaches are in mathematics and physics – fields he once hoped Dale would pursue – the professor’s enthusiasm is evident when it comes to his son’s passion for music.

“At age 11 and a half, when Dale was becoming more advanced and serious about music, we wanted him to be around people he could relate to and in the right setting,” Anthony said.

A couple of years later, the right setting turned out to be music 101 and a guitar course at EOU. Tovar enrolled as a non-admitted student, and in the beginning, Anthony sat alongside him in class. Soon he saw his son was not only able to excel but he was fitting in, something equally important.

“The senior students were very accepting and that meant a lot to both Dale and me,” he said. “It was also the first step toward enrolling him at EOU half-time.”

With the beginning of his junior year in sight, Anthony and Lyn are helping Dale start planning for graduate school. An audition at Julliard tops their list, and ultimately he yearns to be on stage with his guitar.

“I would really like to be a performer,” Tovar said. “It’s a lot of fun and I don’t get nervous at all.”

This easygoing approach was cultivated when he was learning the violin. Tovar performed all around town, from grocery stores to restaurants, as a member of the fiddle group lead by area music teacher Carla Arnold.

Playing shows with the EOU Jazz Ensemble and his own band are fueling the fire, as are interactions with Cooper and others at the university. Tovar is currently studying under Leandro Espinosa, associate professor of music, and Luke McKern.

Through camps and workshops Tovar also gained exposure to multiple acclaimed guitarists including John Stowell, who recently visited EOU to conduct a clinic with students. Stowell even asked Tovar to play with him impromptu for a performance he and Cooper staged a local venue.

“Dale is ambitious and dedicated to his craft, and has a very good chance of making a career as a professional musician,” Cooper said. “Stay tuned for more of him in the future!”