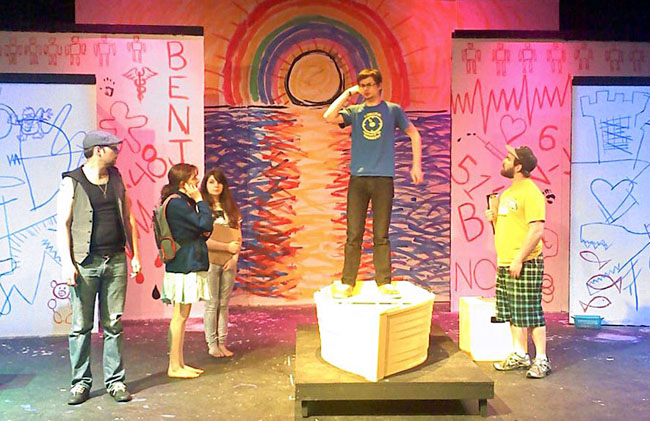 An affirmation of one child’s life and the strength and courage of all children, this dramatization is based on the true story of David and Sonja Saar’s son, Benjamin, who was born with congenital hemophilia and died in 1987 at the age of eight of AIDS-related complications.

A uniquely gifted visual artist, Benjamin’s buoyant imagination transformed his physical and emotional pain into a blaze of colors and shapes in his fanciful drawings and paintings.

A Scandinavian folksong tells of three little boats: “One was blue, one was red and one was yellow as the sun. They sailed far out to sea. The blue one returned to the harbor. The red one sailed home, too. But the yellow boat sailed up to the sun.”

The song was a bedtime ritual in the Saar home and Benjamin always concluded by saying, “Mom, you can be the red boat or the blue boat, but I am the yellow boat.”

Benjamin’s remarkable voyage continues to touch audiences around the world.

The scenery is designed by Bryn McLaughlin and Daniel Wagner, with costumes by Hayley Powell, sound design by Joshua Cornwell and properties by Caleb Stavenger. Julianna Humphreys serves as the production stage manager with Kelsy Carson as makeup/hair designer and Matt Bloodgood as lighting designer.

Performances start at 7 each evening in Schwarz Theatre in Loso Hall. Tickets are $5 for general admission and there are just 360 tickets available. Reserve tickets by calling the EOU Theatre Box Office at 541-962-3757.