See “The Diviners” through March 14 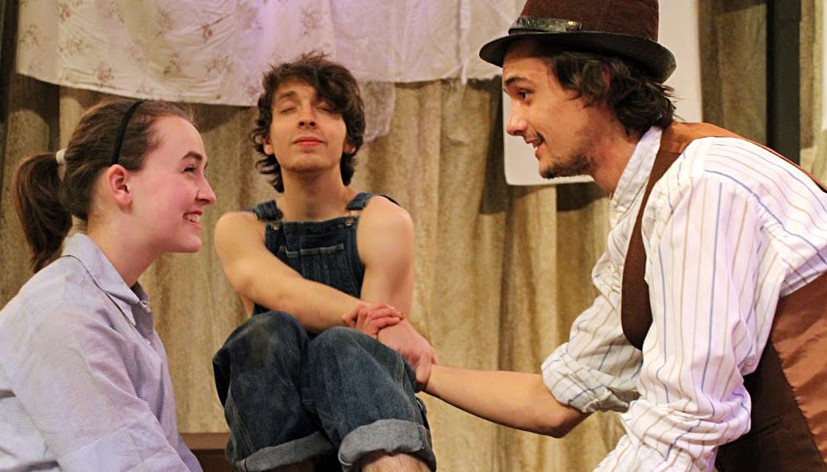 See “The Diviners” at 7 p.m. in Schwarz Theatre.

LA GRANDE, Ore. (EOU) – Eastern Oregon University’s theatre program is gearing up for “The Diviners” to hit the stage March 12-14 at 7 p.m. in Schwarz Theatre in Loso Hall.

Written by Jim Leonard, Jr., the play is the winner of the American College Theatre Festival. EOU senior Bryn McLaughlin is the director.

“The first time I ever saw this show was when my high school put it on,” McLaughlin said. “I remember sitting in the audience and deciding then and there that I wanted to do theatre for the rest of my life.”

“The Diviners,” which takes place in Indiana in the 1930s, focuses on a disturbed young man named Buddy Layman and his unusual friendship with C.C. Showers, an ex-preacher. The two characters meet when Showers passes through the fictitious town of Zion looking for work. The two bond over Buddy’s ability to predict rainfall and his fear of water — a condition he developed after he nearly drowned as a child and lost his mother in the same incident.

Showers, determined to break away from a long line of Kentucky family preachers, works as a mechanic for Buddy’s father while also helping Buddy overcome his fear of water. However, the town doesn’t have a preacher and the women of Zion try to convince him to take on the duty. When Showers finally gets the boy to wash in the river, the townsfolk mistake this as a baptism, which ultimately results in a great tragedy.

McLaughlin expects people who see this play will be moved by the performance.

“I hope that the audience will feel the way I felt when I first saw it,” she said. “It has the potential to be life changing.”

Israel Bloodgood will be taking on the role of Buddy alongside Richard Scott, who plays C.C Showers. Avalon Bloodgood is cast as Buddy’s sister, Jennie Mae, and Josh Byers plays his father, Faris. Cody Wyld Flower and McKayla Nitz will portray the farmer Basil Bennett and his wife Luella.

Joanna Vincent will play the role of Norma Henshaw, the owner of the Dry Goods Store. Noah Jane Mugrage will portray her niece Darlene. Xiola Kegel-Grende will play the part of Goldie Short, who believes C.C.’s arrival is a gift from God. Shay Henderson and Griffin Fleming, who play Bennett’s farmhands, round out the cast.

Tickets are $5 and can be purchased at the door but advance reservations are recommended. Go to www.ticketpeak.com/eou or call 541-962-3757.