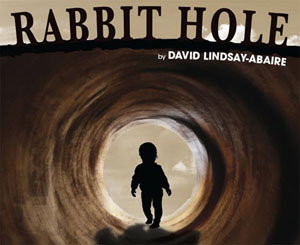 February 5, 2014
LA GRANDE, Ore. (EOU) – How does one overcome the grief of losing a child? David Lindsay-Abaire tackles this tough question in his Pulitzer Prize-winning play, “Rabbit Hole,” opening at EOU Feb. 6-8 and 13-15.

Performances are at 7 each night in Schwarz Theatre in Loso Hall.

“Rabbit Hole” centers on Becca and Howie Corbett who have everything a family could want until a life-shattering accident turns their world upside down.

As the couple begins drifting perilously apart, the play charts their bittersweet search for comfort in the darkest of places, and for a path that will lead them back into the light of day.

Lindsay-Abaire penned the drama after Marsha Norman, his teacher at Julliard, urged him to write a play about something that frightened him. Drawing on his experience as a father, Lindsay-Abaire began shaping a story about a husband and wife who lose their only child in a freak car accident.

Heather Tomlinson, assistant professor of theatre and costume designer, is making her directorial debut with this emotional piece. Her reasons for choosing the play are personal.

“Having gone through the loss of a child myself, I thought the playwright painted an accurate picture of the grieving process and how it can alter your life,” Tomlinson explained. “I feel as though death and grief is glazed over in our society. It is brushed aside and not freely talked about, especially the death of an infant or child. I wanted to be able to share this story with others and perhaps open up those channels of communication.”

Rounding out the cast is sophomore Josh Byers playing Jason Willette, the 17-year-old who accidentally hit the Corbett’s son, Danny, with his car.

Tickets are $10 general admission and $5 for seniors, students and active or retired military. Call 541-962-3757 for reservations or purchase tickets online at ticketpeak.com/eou.