Theatre presents “On the Verge” 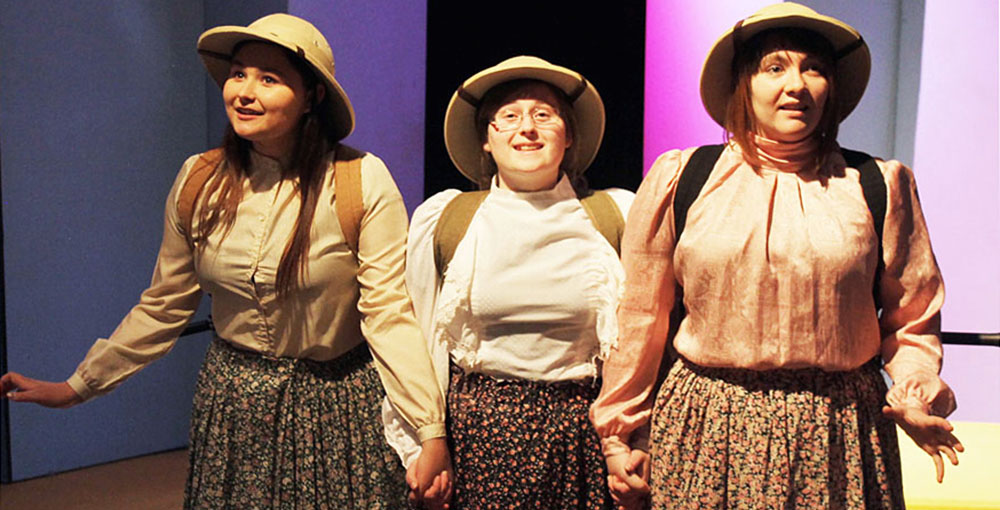 LA GRANDE, Ore. March 24, 2016 – Prepare to be transported through space and time in Eastern Oregon University’s upcoming production of “On the Verge” April 7-9 and 14-16.

With a steampunk inspired stage set designed to draw audiences into the action, this comedy directed by Kenn Wheeler is best known for its wordplay surrounding three Victorian women on a chimerical journey.

EOU theatre students McKayla Nitz, Victoria Ingram and Danielle DeVall are cast as Mary Baltimore, Fanny Cranberry and Alexandra Cafuffle respectively – all explorers on an adventure to strange new lands and as it turns out – the future. Fellow theatre major Sam Shown rounds out the cast, taking on seven different male characters and one female role.

The three women are markedly different in their viewpoints and approach to the situations and people they encounter. Mary is scientific, Fanny is conservative and Alexandra is progressive.

Nitz, a junior from Pendleton, said this is her favorite play to date, having appeared in six other productions at EOU including “Les Misérables” and “Jekyll and Hyde.” She said the dynamics between the three leads and their depth of character drew her to the story.

“This play quickly became my favorite because of how unique and different the female characters are,” Nitz explained. “I also really enjoy playing a character like Mary who is very scientifically minded and logical, because that’s how I am. The show itself is really charming as well.”

Nitz said she likes the era the story begins in, and how it is contrasted by the many different time periods the explorers encounter along the way. Memorizing the dialogue, which includes numerous rarefied words, is both a challenge and a joy for the small cast of four.

“The script includes really advanced vocabulary, and on top of that, there is a very specific pattern of speech to follow,” Nitz said. “It’s important that we keep from sounding too modern!”

“On the Verge” premiered in 1985 and was written by Eric Overmyer, an executive producer of the television series “Law & Order.” As the director of EOU’s production, Wheeler, an associate professor of theatre, is interested in the audience interpretation of specific references relevant to that decade, including Communism. He is excited to be revisiting the story after directing it 30 years ago for his graduate program at Michigan State University.

“This is really a fun show. It is hilarious, clever and unlike any other play I’ve ever seen,” Wheeler said. “Perspectives have definitely changed since the ‘80s, but the storyline will be interesting for people of all ages. In many ways, this is the perfect play for a college student…we are here to expand our minds and vocabulary.”

Wheeler describes the dialogue, delivered through journal entries written by the central characters as they document their experiences through osmosis, as “beautifully poetic.”

Terms used in the script and their definitions will be projected on the walls of the theatre to help give audiences a 19th century frame of reference. Words like “pulchritude” which means beauty, and “peregrination” which means to travel from place to place, especially on foot.

Conversely, brand name supermarket products like Cool Whip and everyday items such as the rear-view mirror in a car are inconceivable to the explorers.

“It is so refreshingly eye-opening to think about our language and what it must be like for someone from a different time period to hear these words and consider their meaning,” Wheeler added.

A unique scenic design is employed for the show. It features a clock face painted at center stage with large rotating platforms representing the hour and minute hands, and thus the characters’ passage through time. Part of the set extends up through the aisles to the back of the house. Props will also drop from the ceiling at pivotal moments, adding to the 360-degree, immersive experience.

See “On the Verge” at 7 p.m. in Schwarz Theatre in Loso Hall. Tickets are free for EOU students, $12 for general admission and $6 for senior citizens, high school students and retired or active military members.

For more information call the box office at 541-962-3757. To purchase tickets online go to www.ticketpeak.com/res/eou.