Photo by Fernando Moreno / Violet, played by April Curtis, is the “linchpin” of the Pulitzer Prize-winning play written by Tracy Letts opening at EOU this week.

Ken Bush, professor of theatre, and April Curtis, professor of media arts and communications, are teaming up for one last production at EOU.

Written by Tracy Letts, the drama is director Ken Bush’s last curtain call before he retires from his 17-year career at the end of this academic year. It will also be the last role for lead actress April Curtis who joined the theatre program in 1992 and is now devoting her time to teaching in the communications studies program.

The story centers on a family gathering to bury their father Beverly – played by Bush – a college professor and alcoholic who committed suicide. After seeing the Pulitzer Prize-winning production on Broadway in 2009, Bush knew he wanted to direct it at EOU.

“This show is really groundbreaking, with the strongest female roles I’ve seen in a contemporary play in years,” Bush said. “The lead is a force to be reckoned with.”

Violet, played by Curtis, is the mother and “linchpin” of the story. She is also a prescription drug addict and ultimate survivor who draws her strength from other’s weaknesses.

“She has an enormous scope of character,” Curtis said. “The biggest challenge has been distinguishing the range of her emotions fueled by drugs, rage, loss of power and love. She’s like an onion and we see what’s left after every layer is gone.”

“This is one of the richest plays I’ve ever read,” she added. “When you lose someone, a blossoming or an unraveling occurs and this story illustrates how generational secrets like addiction are woundings you pass on.”

As the plot unfolds in an old farmhouse, moments of dark comedy arise from the pain. Bush hopes audience members will be able to see a bit of themselves and their own families in certain situations.

The set is constructed as a cutaway so that three levels of the house are visible, even the attic. All the relatives, including Violet’s three daughters, haven’t been home in years.

“Each scene is like breaking a box, and no one gets to leave the house until they’re broken,” Bush explained. “There’s a simultaneous sense of shock and recognition of how bad it can get between people who are supposed to love each other.” 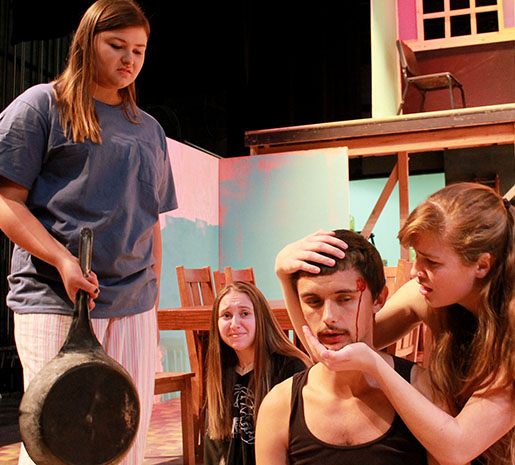 “Interacting with these amazingly talented people is a privilege and so much fun,” said Curtis, whose last stage role was six years ago.

Most of all, Bush and Curtis said they want audiences to have an amazing time and experience the emotional energy of the students’ work.

“During our first real run through you could see all the actors ‘breathing’ in their roles, really identifying with the characters and script,” Bush said.

“I hope people leave with the idea that theatre is a powerful window on human relationships,” Curtis added. “It’s important for our students, and the audience, to be involved in the rawness and depth of a show like this.”

See “August: Osage County” through Saturday, Nov. 14 at 7 p.m. Tickets are free for EOU students with valid ID, $12 for general admission, and $6 for senior citizens, other students and active or retired military members.