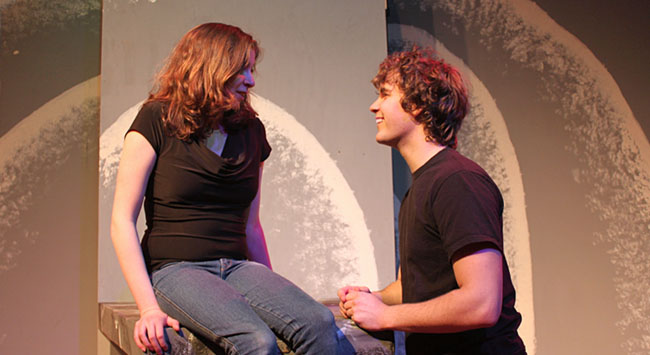 EOU photos by Michael Heather / Jeanie Nickel and Joshua Cornwell rehearse their roles as Rosaura and Segismundo in “Life is a Dream” opening Thursday.

Classic drama “Life is a Dream” unfolds in Schwarz Theatre 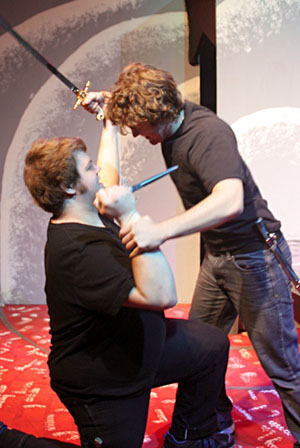 Caleb Hulsey, left, as Clataldo and Joshua Cornwell as Segismundo.

Opening curtain for “Life is a Dream” is 7 p.m. Thursday in Schwarz Theatre in Loso Hall. Performances continue at 7 Friday and Saturday, with a matinee at 2 p.m. Sunday.

The story begins when an astrological omen predicts that if King Basilio’s son Segismundo is crowned, he will become a horrible tyrant and bring destruction to his kingdom.

Basilio imprisons his son for life, but decades later he decides to let him prove his ability to defy the stars. Allowed to rule the palace, Segismundo wreaks bloody vengeance on the kingdom, confirming the prediction, and is returned to his prison.

The question of whether life is a dream or an illusion takes on renewed relevance and urgency in this translation by Nilo Cruz of Pedro Calderón de la Barca’s classic drama.

Rounding out the cast is Jeanie Nickel as Rosaura, Brian Moore as Astolfo, Ellie Aiton as Estrella, Caleb Hulsey as Clotaldo and Bryn McLaughlin as Clarìn with Rachel Bentz, Noah Fulfer and McKayla Nitz as the servants, guards and soldiers.

Michael Heather, associate professor of theatre, is serving as director, as well as scenery and light designer. Theatre student Hayley Stavenger is designing the costumes as her senior project.

Tickets for “Life is a Dream” are $10 general admission and $5 for students, seniors and active or retired military.