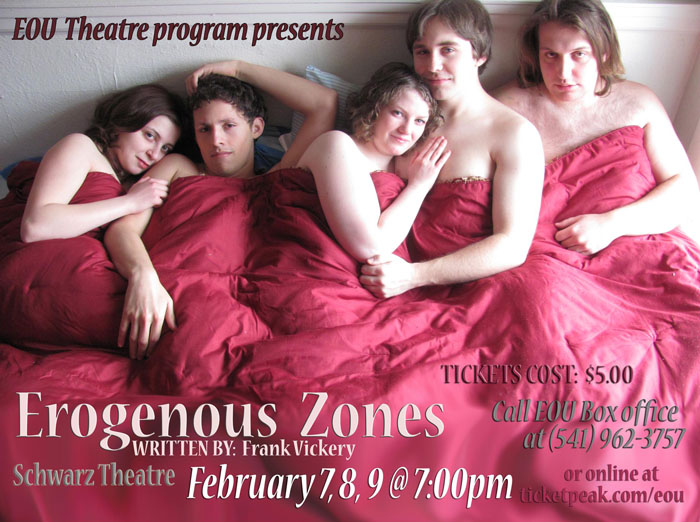 Performances continue on Friday and Saturday with the curtain rising at 7 p.m. all three nights.

This is the first production of the EOU theatre program’s Second Stage Season, which includes student-directed plays that are usually more cutting-edge and appropriate for adult audiences.

“The audience gets an entertaining story about the complicated relationships of these five characters and the struggles they face in each of their lives,” Phipps said. “The title is not so much a reflection on the sexual content of the play, but the naked portrayal of the characters in these moments that are sensitive and vulnerable.”

The cast includes Nicole Terrill as Leslie, and Brian Moore as her husband Tom. Andrew is portrayed by Bridger Adkison, while his roommate Michael is portrayed by Grayson Farner. Jeanie Nickel rounds out the talented cast as she takes on the role of Allison.

“The wonderful thing about student-directed shows is that when they are completely produced, directed, designed and acted by students, they have a tendency to attack their assignments with great passion and their productions, more often than not, turn out to be quite exciting,” said Kenn Wheeler, associate professor of theatre at EOU.

Zora Parker is the scenic designer and Hayley Stavenger is creating the costumes, while Alexandra Uemura is doing properties and Scott Nearing is designing the lights. Adam Lindberg serves as the stage manager.

“Erogenous Zones” will be performed in the Lyle Schwarz Theatre in Loso Hall.  Tickets are $5 each and may be reserved by calling the box office at 541-962-3757 or purchased online at www.ticketpeak.com/eou.