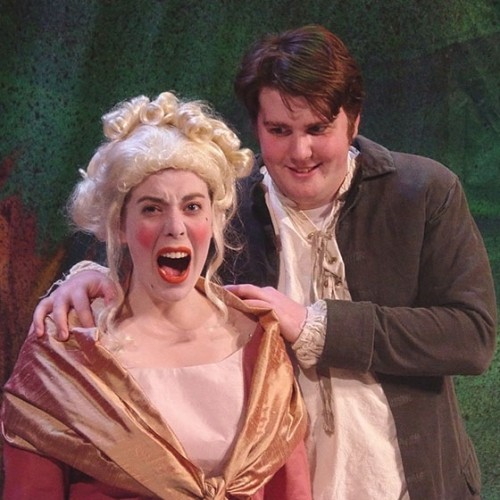 EOU file photo / Catch all six exciting theatre productions coming up during the 2015/2016 season of mystery, mayhem and murder.

Kenn Wheeler, associate professor and spokesman for the theatre program, explains the theme for the season.

“We selected our six shows and then realized that each dealt in one way or another with mystery, mayhem and murder, so we decided we would use that phrase as our theme for the year,” Wheeler said. “We’ve selected two murder mysteries as the ‘bookends’ for the season.”

“The opening production in October is “Death by Design,” written by Rob Urbinati and directed by EOU senior Saajan Chauhan. The story revolves around a playwright and his wife fleeing London after a disastrous opening night. As various guests arrive, each with a long-held secret, it’s up to the maid to solve the crime when one of them is murdered.

Concluding the season in June is one of Agatha Christie’s most beloved murder mysteries, “The Mousetrap.” EOU senior Tabitha Angier will direct this play about a group of strangers stranded in a boarding house during a snowstorm. One of them is a murderer and the police must reveal the secrets of each boarder in order to identify the suspect.

Other performances in the lineup are “August: Osage County” opening in November, Shakespeare’s “King Lear” in February, “On the Verge” in April and “Spamalot” in May.

Ken Bush, professor of theatre, is directing “August: Osage County.” The production stars another long-time faculty member, April Curtis, professor of media arts and communication. Written by Tracy Letts, the story concerns a family investigating the mysterious disappearance of their patriarch, who seems to have taken many secrets with him.

Grant Turner, artistic director of the fledgling La Grande Shakespeare Company, is directing “King Lear.” This classic tragedy explores the jumbled mind of a king and the mayhem that ensues when he gives his kingdom away.

Wheeler is bringing “On the Verge,” a story about three Victorian women adventurers who mysteriously explore time and space, to the EOU stage. Wheeler first directed this comedy in graduate school and said he is looking forward to seeing how time has changed the way he approaches the play and its themes. It is written by Eric Overmyer.

Michael Heather, associate professor of design, will direct what promises to be a crazy, wild ride in “Spamalot,” a musical version of the Monty Python skewering of King Arthur’s search for the mysterious Holy Grail. Eric Idle wrote the book and lyrics and collaborated with John Du Prez on the music.

“Anyone who loves curling up in front of a roaring fire with a good ‘whodunit’ will want to take advantage of a season ticket,” Wheeler said. “We’re very excited about presenting this thrilling season and want everyone to become part of this great undertaking.”

All productions will be presented in either McKenzie Theatre or Schwarz Theatre on campus.

For more information about season passes, call the EOU box office at 541-962-3757 and leave a message with your name and phone number. A member of the theatre program will respond with details.