The edge of mathematics 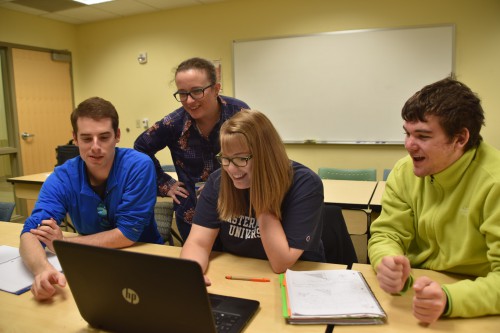 Feb. 16, 2018 La Grande, Ore. — Intellectual vitality is the name of the game in Amy Yielding’s student research group at Eastern Oregon University. A close-knit team of undergraduate students from math, biochemistry and computer science backgrounds come together twice a week to wrestle with complicated mathematics.

Taylor Rhoton, a senior from Avondale, Ariz., said participating in research gave him a headstart in how to think about abstract math.

“It’s helped with my overall approach to math, especially in Structures of Abstract Mathematics, which was a lot of proofs and that’s what we do here, too,” he said.

Yielding, a mathematics professor at EOU since 2009, said her experience as an undergraduate researcher in astrophysics inspired a shift in her career focus.

“I realized I wanted to advance the mathematics discipline, as well as populate the world with more mathematicians,” Yielding said. “As a first generation student, this experience was the reason I even considered continuing on to graduate school. I knew that wherever I ended up, I wanted to provide this valuable opportunity to my students.”

Each year, her class investigates a particular phenomenon and publishes a paper with their findings. Yielding often fields queries about math research in general. Students question whether there’s anything left to discover because the concepts covered in classes tend to be hundreds of years old. She said the math research team invites students to experiment with living mathematics and reminds them that the work is far from finished.

“It keeps me excited about what I’m teaching,” Yielding said. “And it keeps them engaged in what they’re learning in the undergraduate curriculum.”

Taylor Hunt, a junior studying mathematics, said the research experience has opened her up to being more inquisitive about the edges of known math and Yielding has encouraged her to explore the possibilities presented by graduate school. Hunt has developed the confidence and competence to succeed that EOU cultivates in all students.

“I’ve started to question why it is we know what we know about math,” she said. “This approach has helped me in my studies and classes. My time with the research team has cemented my goal of going to grad school.”

Yielding invited Hunt to join her summer research program as a first step into the kind of work involved in graduate level mathematics.

“I have always wanted to teach, but I had my eyes set on teaching high school and never aspired for anything else,” Hunt said. “[Yielding] showed me the world of mathematics and all that is yet to be discovered. She has also been the biggest supporter of me entering a grad program and believing that I am capable of succeeding.”

Hunt was a new member to the otherwise experienced research team this fall, but soon became an integral part of their progress.

“When I asked to be a part of the research team I was a little apprehensive at first,” she said. “I didn’t think I would be able to keep up with the other researchers, or that somehow I was less intelligent than they are. After I started working on the research topic I saw all that I accomplished and proved to myself that I can contribute to the conversation.”

Joel Jacobs, a biochemistry senior from Walla Walla, has worked on three projects with Yielding. He said the most rewarding part is solving problems individually, and then conferring with the group.

Yielding said she sees the tangible benefits of faculty-student research in her students’ achievements each term. Employers have told Yielding that research experience put an EOU student above other job candidates because they had proven their ability to work and communicate effectively with others.

“It’s not just the actual ‘result’ from the research that is important — it’s the ability to work together and communicate your findings both written and orally to the public,” she said. “When it’s their findings, [students] get over the fear of talking to others. I have witnessed this over and over again.”

Yielding encourages students to engage in academic discussion with confidence — with one another and with the wider research community. Hunt said the experience emboldened her to speak up more freely in classes.

“This research opportunity made me realize that it’s normal not to know the answer and it’s encouraged to ask questions,” Hunt said. “Because if you don’t know the answer, someone else might — and together you can arrive at the conclusion.”