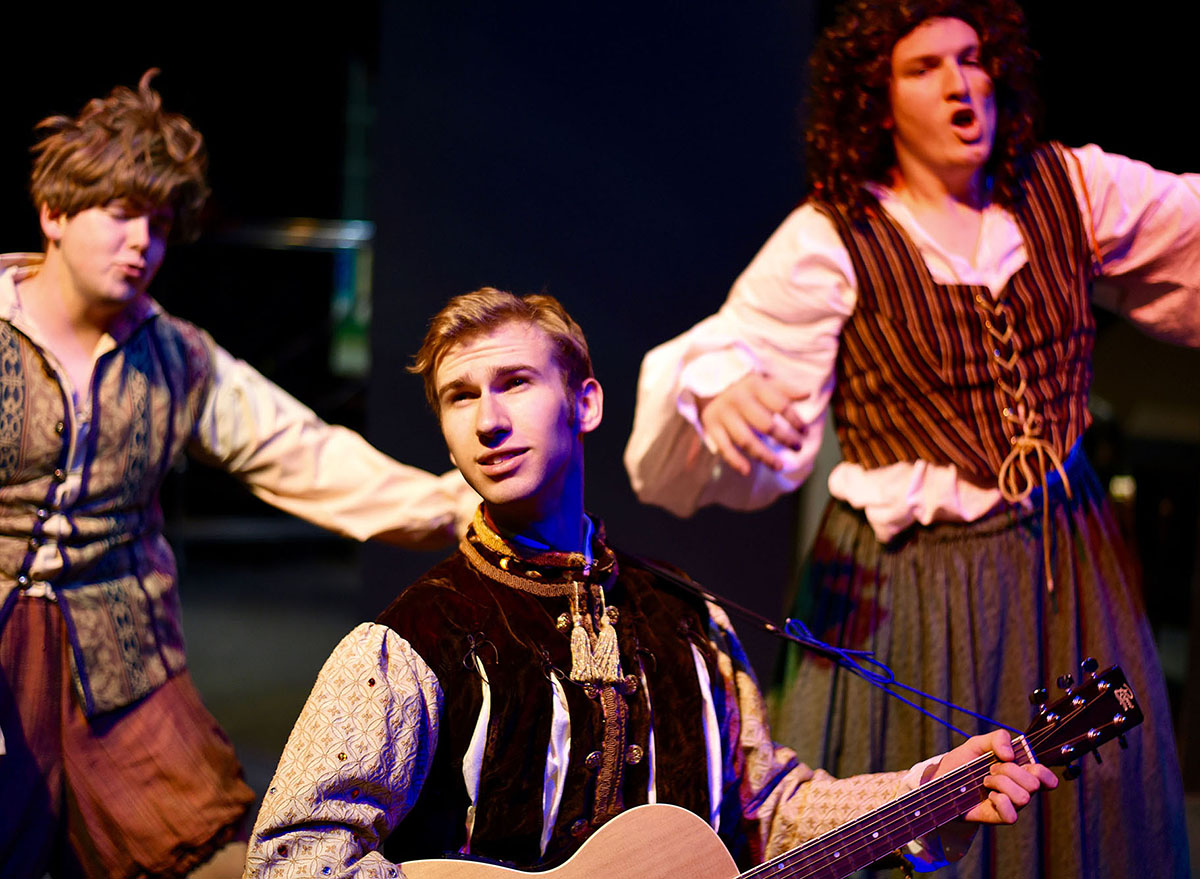 From left Jason Lineback, Sam Shown and Alan Stogin rehearse a scene from “The Compleat Wrks of Wllm Shkspr, Abridged” opening at EOU October 12-15 and 21-22. The three students comprise the entire cast of the comedic tour de force that marks the beginning of EOU’s theatre season dedicated to Shakespeare. 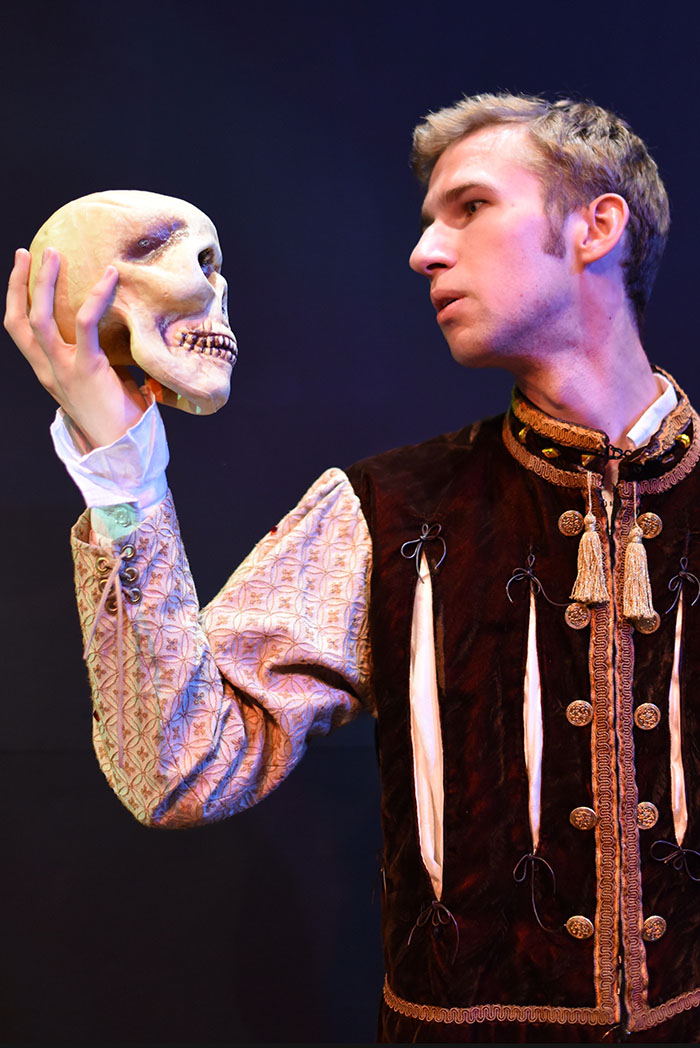 LA GRANDE, Ore. October 7, 2016 – A whirlwind production of “The Compleat Wrks of Wllm Shkspr, Abridged” is playing at Eastern Oregon University this month, and it promises to have audiences reeling with Monty Pythonesque humor.

Wednesday, Oct. 12 is opening night and the show continues through Saturday, Oct. 15. It returns for a second weekend coinciding with EOU’s Homecoming celebration on Friday and Saturday, Oct. 21-22. Performances start at 7 each night in Schwarz Theater in Loso Hall.

“They’ve been doing great work,” said production director Kenn Wheeler of his cast. “I’ve also heard them say this is the hardest play they’ve ever done because once the show starts, it just continues to go!”

The associate professor of theatre knew Shown, Stogin and Lineback were perfect for the parts after watching them audition and he tasked them with memorizing their lines before fall term began in September.

“This is a really funny, almost irreverent farce,” Wheeler explained. “We perform ‘Othello’ as a rap, ‘Titus Andronicus’ as a cooking show, and ‘Hamlet’ with finger puppets.” 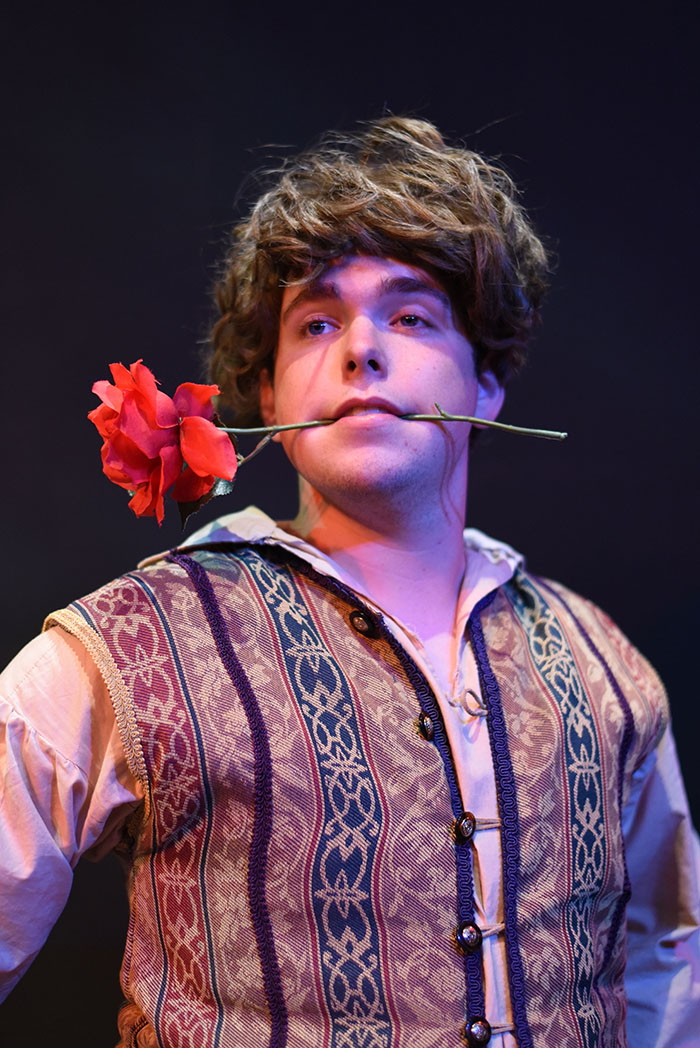 Shown, a freshman from La Grande majoring in theatre and music, said he enjoys the rapid pace of the work. He plays Hamlet, Macbeth and Friar Laurence from “Romeo and Juliet,” among other iconic roles.

“I like the versatility of doing so many things in one show and not being constrained to one character,” Shown said.

Lineback is also from La Grande and a freshman double majoring in theatre and music. Having made his first appearance on EOU’s stage in “Monty Python’s Spamalot,” he was attracted to the show’s similar comedic quality.

“The humor of it all is what I really enjoy,” he said. “I’ve always been cynical, which makes people laugh, and this show is kind of like my life in that it’s controlled chaos. Finding that balance of pacing and comedic timing is key.”

For Stogin, a sophomore majoring in theatre directing from Washougal, Wash., being cast in the production falls within his wheelhouse and taps into a fondness for the English playwright.

“I love Shakespeare, and I also love making fun of him, which is what this play does,” Stogin explained. “My favorite part is when I get splashed with water on stage. The most challenging aspect is all of the costume changes, and we have a list backstage to help us keep track of who’s up next.”

Stogin will also direct the contemporary comedy “I Hate Hamlet” opening at EOU in June. 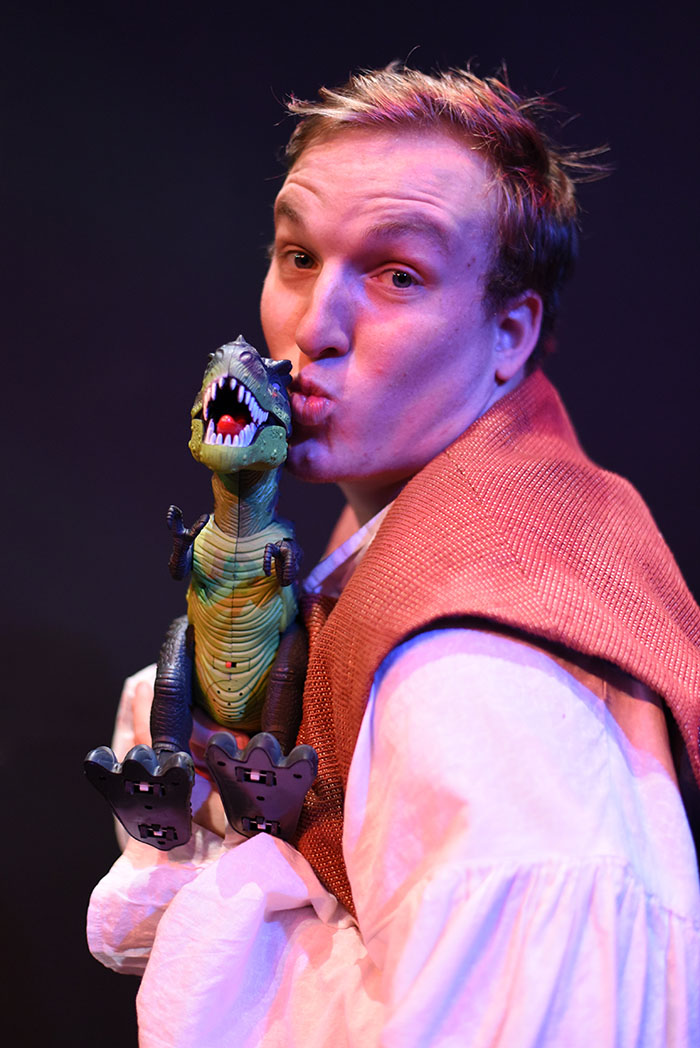 Working behind the scenes to ensure all of the quick changes occur seamlessly are four more students. Senior theatre major Cassandra Johnson, of Nyssa, is the stage manager. Danielle Devall, a freshman from Washougal, is the assistant stage manager. Sophomore Xiola Kegel-Grende, of Lewiston, is the props mistress, and Sydney Bell, a freshman from Coeur d’Alene, volunteers wherever needed.

Everyone involved with the production agrees it will appeal to both die-hard Shakespeare fans and those who may be unfamiliar with his work but appreciate a good parody.

The entire 2016-17 EOU theatre season is dedicated to the 400th anniversary this year of Shakespeare’s death in 1616. Other upcoming shows include “We Happy Few,” “Hamlet” and “West Side Story.” A Royal Renaissance Feast fundraiser is also planned in February.

Tickets for “The Compleat Wrks of Wllm Shkspr, Abridged” are free for EOU students, $15 for general admission and $10 for members of the military, senior citizens and students from other schools.