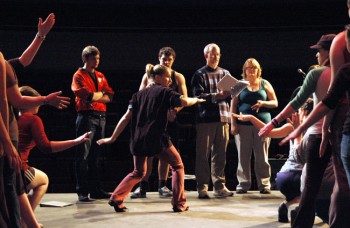 The EOU Chamber Choir works on choreography for "I've Got the Music in Me" by the Kiki Dee Band, one of 29 hit songs on the lineup for That '70s "Show" concert.

Over the last weekend in January the EOU Chamber Choir and music department will stage an epic performance in the same vein as A Beatles Celebration and Flashback to the ’60s.

With this concert, it’s all about attitude.

Choir Director Peter Wordelman has put together a sampling of the grooviest songs of the 1970s featuring solos, ensembles and dance numbers. The 29-song lineup features famous hits by Stevie Wonder, Neil Diamond, Queen and others. Add a full band, wind instruments and a small bluegrass group and it’s sheer That ’70s “Show” magic.

Often, Wordelman seeks out alumni to help with special projects and has brought contemporary dancer and former EOU student Catherine Herrmann on board for this one. 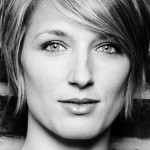 She’s charged with creating choreography for the choir that captures a ’70s mood.

“I like to bring as many of our alumni as possible back to campus to work with our current students,” Wordelman said. “I call it our ‘life after EOU’ series.”

“Catherine is an excellent dancer and a wonderful person. With her connection to several choir members and her own involvement with the department as an undergraduate, she is the perfect person to work with us on the show,” he said.

In the short time before the production opens, 48 choir members are singing and dancing their hearts out, learning 17 fully choreographed numbers. The routines are challenging, but the students say it’s great to be working with a professional dancer.

By the third day of rehearsal with the largest company she’s ever choreographed, Herrmann was impressed with their natural talent.

“Their enthusiasm is huge!” she said. “My focus is really to convey the feeling and energy of the decade and make sure the performers have a good time.”

Watch a few minutes of their practice and it’s clear the students are having fun. As one choir member put it, “The ’70s is about attitude, so it’s really easy to get hyped up about the dancing.”

Like most of the performers in the show, Herrmann wasn’t around during the 1970s. To help with context she began studying people who were immersed in the music and dance trends of the decade, even attending a wedding featuring a ’70s-style DJ for added inspiration. Her fiancé Kevin Kossi also proved a good resource as a native New Yorker who was part of the original Studio 54 disco scene in Manhattan.

Using descriptive words in conjunction with her choreography helps Herrmann give the choir members a tangible sense of the feeling or mood their movements convey. This approach is part of a broader technique called the Laban Movement Analysis.

“Words like sparkle, crisp, still or silent all describe the effort involved beyond just the steps,” she said.

Growing up in La Grande, Herrmann was introduced to music and dance at a young age. Her mother Swannee Herrmann is the director of the La Grande School of Ballet and also taught violin, viola and cello for many years. Her father Tom Herrmann is a physics professor at EOU and both he and Swannee perform with the Grande Ronde Symphony Orchestra.

It seemed a natural course when Herrmann enrolled in EOU’s music program the fall of 2002. After two years and with encouragement from her family and professors, she left to follow her passion at the University of Georgia-Athens on a national student exchange program.

“Since I was 16, I knew I wanted to become a dancer and finally saw a way to pursue it,” Herrmann said. “Professor Wordelman is all about his students growing and doing what they love. He still supports me this way.” 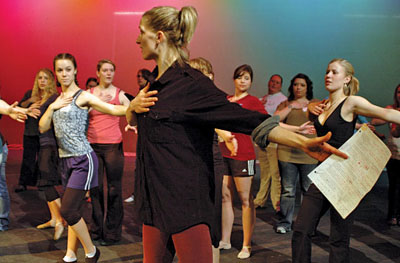 Herrmann will take the stage with the Chamber Choir and band for the song "September" by Earth, Wind and Fire.

Lisa Robertson, assistant professor of music, was another source of support.

“She saw my musical ability actually improved when I imagined the notes set to dance steps,” Herrmann said.

Immersing herself in the University of Georgia’s CORE Concert Dance Company, Herrmann graduated in 2008 with a bachelor of fine arts in dance performance. Her adventurous spirit then lead her to take a leap to The Big Apple to attend the New York Trapeze School and Broadway Dance Center.

The city is Herrmann’s home now and she divides her time working as a yoga instructor and au pair by day and taking her dancing career to new heights as an aerialist by night. Aerialism is a form of acrobatics and Herrmann uses hoops, silks, slings and other apparatuses for her midair performances emergent on the diverse underground artist community. Her mom Swannee and mentor Bala Sarasvati, CORE Dance Co., director, influence her style, as does the Anaheim Ballet.

While the disco beats of the songs in That ’70s “Show” won’t incorporate any of her aerial stunts, Herrmann will perform with the group for one of the last numbers on the program: “September” by Earth, Wind and Fire.

“Music and dance are a celebration of life, and this production is an example of people coming together as a community to have a good time and grow,” Herrmann said.
____________

Red Cross Drug Store is presenting the concert and The Observer and EOU Foundation are sponsors. Tickets are available now at Red Cross, Sunflower Books and the EOU Bookstore on campus or at the Mountaineer Market, its new location on Adams Ave.

Admission is $8 for adults and $6 for students and senior citizens. A group rate of $5 per person is available if purchasing 10 or more tickets. For more information contact Peter Wordelman at 541-962-3638.