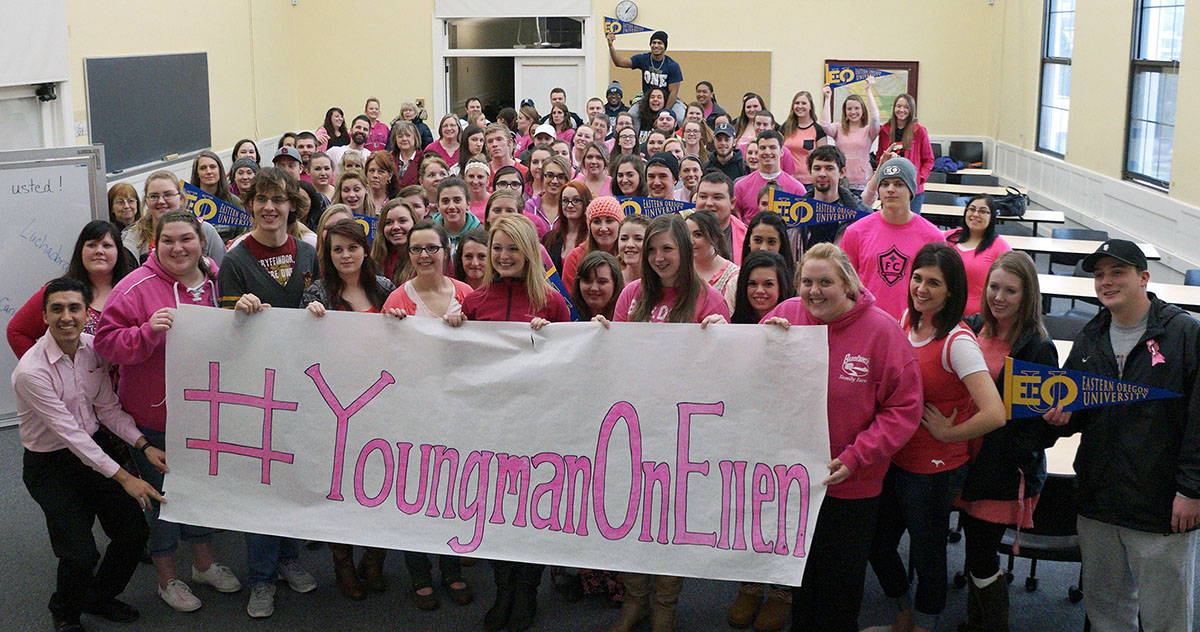 Photo by Yeonhee Yiu / Tawnya Lubbes, an assistant professor of education at EOU, organized a group photo last week as part of a social media campaign to support Kathryn Youngman, a Spanish teacher at Pendleton High School who has been diagnosed with cancer for the third time. Youngman’s students at Pendleton started the campaign #YoungmanOnEllen because she loves The Ellen DeGeneres Show.

By Cherise Kaechele
This story appeared in the February 1, 2016 issue of The Observer and is republished here with permission. 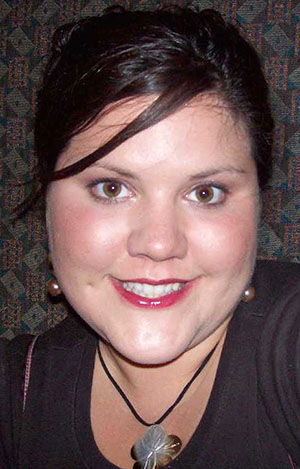 Professor Tawnya Lubbes attended Pendleton High School and said she was inspired by Youngman’s “amazing teaching and passion for kids” she experienced when she was a student there.

LA GRANDE, Ore. – It was a plethora of different shades of pink on Thursday afternoon, but the students from Eastern Oregon University stood behind a unified message: to support a local Spanish teacher going through her third diagnosis of cancer.

Pendleton High School Spanish teacher Kathryn Youngman was diagnosed with breast cancer. Her students at the high school know that their beloved teacher is a fan of Ellen Degeneres, a comedian and talk show host, and have started a campaign to get Youngman to meet her idol.

On Thursday, a large group of EOU students from the Spanish Club, Residence Life and EOU athletics gathered together in Ackerman Hall to take a photo to share on the social media under the hashtag #YoungmanOnEllen to support Youngman — and the movement has grown so much it’s trending on Facebook and Twitter.

“A group of (Youngman’s) high school students decided to start this movement to support her and get her on The Ellen Degeneres Show,” said EOU Professor Tawnya Lubbes, who teaches the undergraduate elementary program and planned the EOU event.

Lubbes, who didn’t have Youngman as a teacher at Pendleton but had her as a mentor, saw through her own personal Facebook account the support Youngman was getting from PHS students both current and previous, who all wore pink to school one day. Area organizations, businesses and supporters in Pendleton and the surrounding areas have rallied together to take their own photos.

The story hits close to home for students at EOU. Many of those who wore pink on Thursday and took the photo were former students of Youngman’s.

Among them was Josephine Finch, who graduated from PHS in 2012.

“(Youngman) was always at school and would greet (her students) at the door,” Finch said. “She was very outgoing and enjoyed her job.”

An inspiration to her students, Finch said she thinks Youngman was going through her second diagnosis of cancer when Finch was in high school.

“She’s a strong woman, she loved her job and her students,” said Finch, who had Youngman as a Spanish teacher.

Lubbes said Youngman doesn’t like missing her class. She’ll have a round of treatment one day, then she’s back in class the next.

“She was always about being there for her students,” Lubbes said. “She was so kind to her students. That’s why she likes Ellen Degeneres, who is all about community service, giving back and showing kindness.”

Both Finch and Lubbes heard about the movement through Facebook. And then people began sharing the photos from all over the area.

“There’s been an amazing outpouring,” Lubbes said. “There’s so much love and support from people who knew her years and years ago (who) are coming forward.”