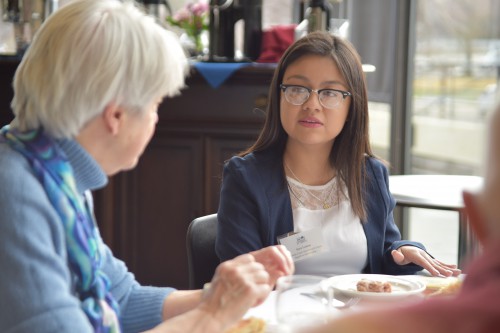 The EOU Foundation awarded more than $600,000 in student scholarships for the 2017-18 academic year through private gifts and grants.

Each year, Tea and Trumpets brings recipients and donors together for an afternoon to acknowledge student achievement, donor commitment and transformational education at EOU.

Brad Stephens, a retired orthopedic surgeon and current trustee on EOU’s governing board, shared his story of involvement on campus.

“It all began when I started treating EOU students and student-athletes,” he said. “I got to know the students and I liked them a lot. They’re hardworking and often have a high level of need.”

Stephens returned to Eastern Oregon in 2007 after a stint working with Olympic athletes in Lake Placid, New York. He lives in Joseph now, and funds a full scholarship with his wife Anne. Although neither of them attended EOU, the couple have found immense value in their regional university.

“It’s meaningful and important to support these students,” he said. “EOU is a very important institution in Eastern Oregon and it has a bright future.”

After graduating from Harvard, Stephens came to La Grande in 1975 to work as a surgeon. His three sons went to Ackerman Elementary School on campus, and Stephens joined the EOU Foundation Board Trustees in 2008. Stephens and others like him represent the culture of philanthropy fostered at EOU.

“It’s neat that there’s a place like Eastern where you can feel good about giving,” he said. “The small university has so many advantages and it really supports students from rural backgrounds.

Eleanor Stuart, Coral Goldstein, Quentin Durfee and Makayla Mangione each spoke about their experience as scholarship recipients. Their stories touched on personal and financial struggles, facing adversity early in life, and the all-important scholarships they received from the EOU Foundation.

Privately funded scholarships often make it possible for first-generation students to attend EOU. EOU Trustee Richard Chaves said this event is his favorite to attend at EOU because it inspires him to stay committed and engaged with the university and its incredible students.

To learn more about the EOU Foundation and scholarship availability, visit eou.edu/foundation.

« On the moves | EOU organizes London literary trip for summer 2018 »