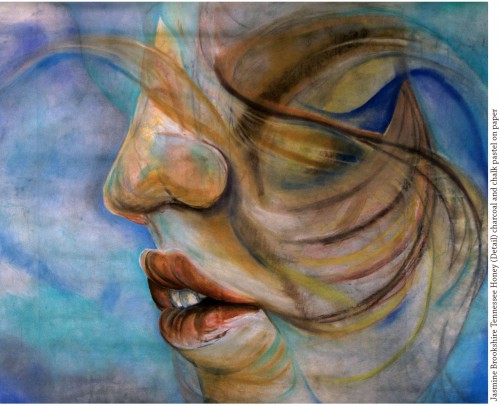 The annual gala showcases a range of contributors to EOU’s student-led literary and arts publication. Authors and artists will read from and present their published work from 7 to 8:30 p.m., and refreshments will be provided.

“In assembling this year’s issue, the faculty advisor and I noticed two themes emerging through a number of the written works selected,” Hetrick said. “The idea of fatherhood was explored, toyed with, anticipated and mourned through a number of pieces in this year’s issue. The other dominant theme was that of loss: the physical or emotional disconnection from a life, a person, or a sense of oneself. These were particularly moving aspects of this issue.”

Hetrick worked with art editor Alexander Navarro, a junior studying art and communication, and faculty advisors Jodi Varon and Mike Sell to compile “Oregon East” over the course of the last year. Upperclassmen participated in the selection process through practica led by faculty advisors and co-editor Katelyn Presley. A student-led jury selected the artwork.

“Oregon East” considers submissions from students across the university until March 15. To submit work, e-mail the editors at oe@eou.edu. The gala celebration is free and open to the public. Visit eou.edu/oe for more information.