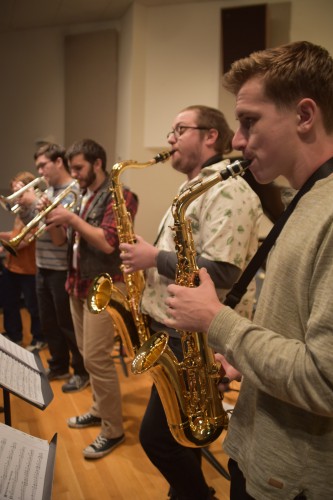 Cooper said that although several independent student groups have arisen in the past, 2/5/1 is the first in several years.

“This group promises to be a really fine one, with excellent players and singers who are very committed to rehearsing regularly and developing original arrangements,” he said. “I am looking forward to seeing them perform around town and in the NE Oregon region in the future.”

Four members of 45th Parallel form the new 2/5/1 combo, which features Greenwell on saxophone and vocals, Carson on keyboard, Lange on guitar and Lucius on drums. The brand-new combo will perform two selections including the chestnut “On the Sunny Side of the Street.” Greenwell, a history and music major from Tumwater, Wash., helped bring the group together this fall.

“[We] wanted a place to play music that we like, develop our skills in a smaller setting, and be able to play in the community,” Greenwell said. “This group lets us work on music at our own pace and find our own sound.”

He said membership in the small combo has enhanced his education. He said the group is focused on jazz but also covers music the members enjoy, for instance an original version of Frank Ocean’s “Thinkin’ ‘bout you.”

“We all have different things we bring to the table that make us better,” he said “Playing music with a small group requires greater attention to detail, more confidence and learning to communicate well.”

Doors open at 7 p.m., and the concert begins at 7:30 p.m. in Groth Recital Hall. There is no admission fee, but donations will be accepted to benefit EOU music scholarships or the Piano Fund. For more information, call 541-962-3559 or email Matt Cooper at mcooper@eou.edu.