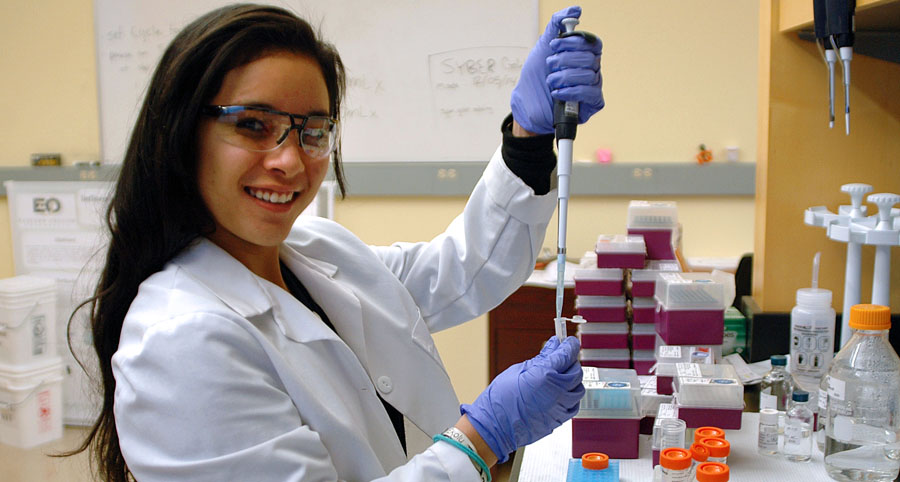 EOU photos by Laura Hancock / A substantial scholarship is making it possible for Tarita Keohokalole-Look to delve deeper into her chemistry minor and conduct research with Professor Anna Cavinato. 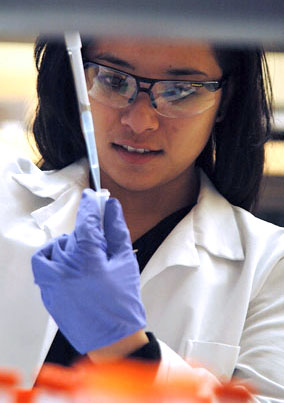 In the lab at EOU, Keohokalole-Look prepares a polymerase chain reaction sample for DNA amplification.

LA GRANDE, Ore. (EOU) – When Tarita Keohokalole-Look’s interest in science first sparked, she had no idea her decision to minor in chemistry in college would yield significant rewards.

The sophomore at Eastern Oregon University is the recipient of a $12,000 research scholarship from the Oregon NASA Space Grant Consortium (OSGC). Just four other undergraduates were selected for the award this year.

EOU Chemistry Professor Anna Cavinato is guiding Keohokalole-Look’s research to identify a new DNA aptamer, or molecule, that will bind to a surface protein used as a biomarker. The isolated DNA will eventually be used to build a biosensor to identify the presence of bacterium in water that causes bacterial kidney disease in salmon.

“I’m from Hawaii, so the ocean and wildlife are very important to me,” Keohokalole-Look said. “That’s what originally drew me to the study after Professor Cavinato talked about it in class.”

To be considered for the scholarship, Keohokalole-Look compiled a 15-page proposal describing the research in detail and outlining her goals for professional development. Cavinato helped her and they spent more than a month preparing the materials.

“It was a huge deal, but the work paid off!” Keohokalole-Look said.

Now the OSGC scholarship is promoting the economics major to delve deeper into her minor. Her other interests include optometry and business.

“I’m keeping my options open and considering each area to see what I might want to do,” she said.

OSGC’s scholarship programs are all about encouraging careers and education in science, technology, engineering and mathematics, in addition to recognizing achievements in these fields.

“I am thrilled for Tarita because this is a great opportunity for her to explore chemistry and it will strengthen her ability to apply its concepts in the real world,” Cavinato said.

“I was able to pretty much pay everything off, which really helped!” Keohokalole-Look said.

Another EOU student, Nyki Anderson, received an $8,000 four-year institution scholarship from OSGC. She is completing a double major in math and science online while interning at NASA’s Goddard Space Flight Center in Greenbelt, Maryland.

> See related story on Anderson: A bridge between EOU and NASA