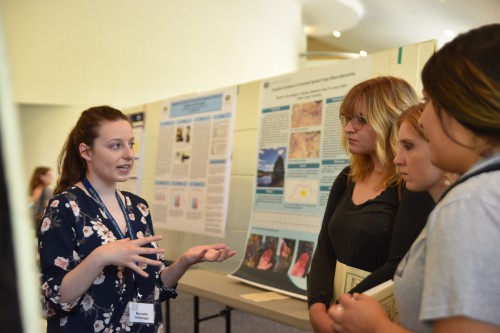 May 20, 2019 LA GRANDE, Ore. –  Almost 90 projects and more than 160 students will feature in Eastern Oregon University’s annual Spring Symposium on May 22.

The one-day event highlights significant undergraduate work from every department on campus through a variety of presentation formats that include live musical performances, panel discussions, open studios and poster displays.

Kyle Pfaffenbach, an Assistant Professor in the Health and Human Performance Department,  led the planning committee for the third consecutive year. This year, the group achieved its long-time aim of involving every department on campus in the symposium.

“This is a very unique display of work,” he said. “At most universities, events like the symposium are broken up by department or discipline. For the EOU Symposium, we’re proud to shine a light on the amazing work of our  students across the arts, sciences, business, communications, anthropology, sociology and other areas.”

Pfaffenbach worked with co-chair and ceramics professor Nathan Prouty to involve students at every level of the event. This year’s presenters will receive a one-of-a-kind mug made on campus by a fellow student.

“We have a student artist who’s helped create the molds, pour them, apply the glaze and add the Symposium logo,” Prouty said. “It’s a really special thing that we hope to keep doing as a tradition for presenters to look forward to.”

Thanks to a grant from the EOU Foundation, the student artist received compensation for their work, too.

“We really encourage underclassmen and community members to come through and be inspired by the great work happening at EOU,” Pfaffenbach said.

The EOU Board of Trustees will attend the Symposium, and all presentations are free and open to the public. Projects cover a range of fascinating topics, including mud-loving beetles, civic engagement and public policy in La Grande, wildland firefighting, printing in Renaissance Europe, life skills development through basketball, poverty and literacy in rural Oregon, how to be a Renaissance prince, gender in early childhood education, correlation between musical ability and athletic performance, commercial hunting in America, the American Revolution, Columbia Spotted Frog populations in Northeastern Oregon, video games as the new novels, and the effect of angular changes on base runners speed when running from second base to home plate in collegiate softball players. See a full list of abstracts at eou.edu/symposium.

The event begins at 8:30 a.m. on May 22 in Loso Lobby with an open house and continental breakfast, followed by the keynote talks at 9:15 a.m. Three different sets of posters will rotate through the Loso Lobby between 10:30 a.m. and 2 p.m., while panel discussions, art installations, theatre performances and group presentations cycle through in classrooms throughout the building.

Visit eou.edu/symposium for a detailed schedule.