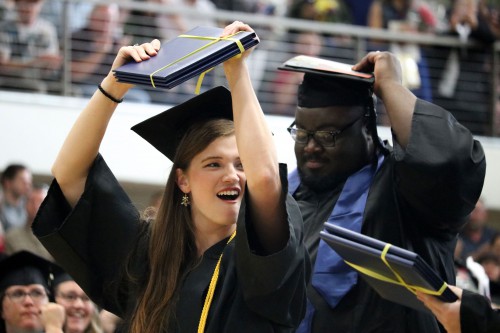 June 6, 2019 LA GRANDE, Ore. –  Eastern Oregon University graduates will celebrate their achievements during two commencement ceremonies on Saturday, June 15 in La Grande. Graduates from the College of Business, the College of Science, Technology, Mathematics and Health Sciences, those graduating with a Master of Business Administration, and those from EOU’s partner program with Oregon State University will walk across the stage starting at 10 a.m. on June 15. Later that afternoon, at 2 p.m., the gym will fill with graduates from the College of Education, the College of Arts, Humanities and Social Sciences, those completing a nursing degree from Oregon Health and Science University, and those receiving a Master of Science in Education or Master of Arts in Teaching. Distinguished EOU alumnus and Oscar-nominated filmmaker Skye Fitzgerald will deliver the keynote speech at both ceremonies, addressing about 200 graduates at each. After graduating with a degree in theatre and a minor in creative writing in 1993, Fitzgerald earned an MFA and started Spin Film in Portland. His company has since produced a handful of hard-hitting documentaries that have taken him from Rwanda, to Cambodia, to Germany and Syria exploring complex global issues for nearly 20 years. But his passion for storytelling began at EOU, where theatre and English professors equipped him with writing and public speaking skills he plans to use in his role as commencement speaker. He said he’s honored to have the opportunity to inspire fellow Mountaineers and alumni-to-be. During the 2018-19 academic year, EOU will have awarded about 740 bachelor’s and master’s degrees through online and on campus programs. Additional student achievements will be highlighted at several special events leading up to commencement. The nursing honor society Sigma Theta Tau will induct new members at 4 p.m., June 13 in Loso Hall Foyer, and Phi Kappa Phi holds its induction ceremony the following morning at  9 a.m. in Hoke Union Building, room 339. OHSU holds its 35th Annual Convocation and Awards Ceremony at 10 a.m., June 14 in McKenzie Theatre, where nursing students are presented with awards and nursing pins. A reception, hosted by the OHSU School of Nursing faculty and staff, will follow. The EOU Student Awards Assembly recognizes students across campus for academic achievement, beginning at 1:30 p.m., June 14 in McKenzie Theatre, with a reception to follow. The Multicultural/International Graduation Celebration takes place from 6 to 8 p.m. that afternoon in the Hoke Union Building’s second floor Lounge. Online and onsite students who’ve completed their degrees at one of EOU’s 11 regional centers or online will celebrate their achievements from 5 to 7 p.m., June 14 on the third floor of Hoke Union Building in room 339. All 438 commencement participants will convene June 15 for their respective ceremonies in Quinn Coliseum. Tickets are required for the main seating area in the gym, but overflow areas do not require tickets. Free parking is available all day in campus lots, excluding reserved spaces. Additional ceremony information is available at eou.edu/commencement, or through contacting the Registrar’s Office at commencement@eou.edu or 541-962-3607.