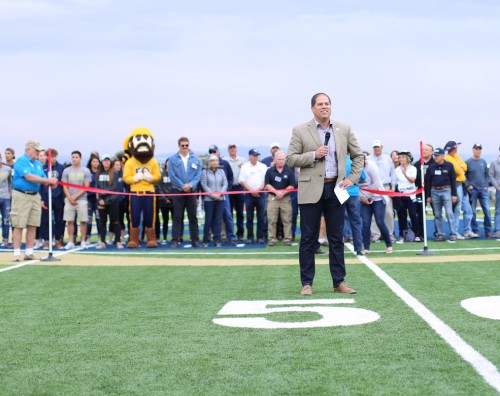 “Les Schwab is proud to partner with EOU in this initiative and continue the relationship that has served both organizations well for decades,” said Jake Tussey, who manages Les Schwab in La Grande.

For nearly 20 years, La Grande’s Les Schwab Tire Center has been an important and active partner to EOU and Mountaineer athletics programs. The company has served as the title sponsor of the Mountaineer Athletic Association (MAA) Golf Scramble, invested in Quinn Coliseum signage and recognition, earned a spot on the athletics Wall of Fame on campus, and supported other programs within the university.

In 2017, EOU launched the Building Champions Campaign that featured the installation of a new synthetic turf at Community Stadium and a new state-of-the-art track and field area. The $2.9 million campaign has enabled the university to host track and field events for the first time in nearly seven years.

With recent commitments totaling more than $250,000, this leaves approximately $400,000 left to raise in support of stadium and track upgrades that allow for year-round use. The multi-purpose venue hosts college and high school football and soccer games, concerts, speakers, fundraisers, camps and other community events. Improved lighting makes the field eligible to host evening and night games, too. In addition to EOU athletic programs, the upgrades also provide the entire student body with a site for club and intramural athletic activities.

Patrick Regan, Executive Director of the EOU Foundation, said the enhancements aid student recruitment and retention as EOU becomes known as a place where students can maximize their collegiate experience. Locally, Regan said the stadium is an economic driver that brings visitors to La Grande.

“This project has key short-term and long-term implications for making EOU and La Grande a preferred destination, which will enable the university to get to the next level,” Regan said. “We are thrilled that our long-time partner, Les Schwab Tire Center, has agreed to join us in this game-changing initiative with this new 10-year commitment, which will keep their name atop the scoreboard at Community Stadium, one of the most visible locations in the Grande Ronde Valley.”

Learn more about the Building Champions Campaign at eou.edu/stadium-track or by contacting the EOU Foundation at 541-962-3740 or foundation@eou.edu.