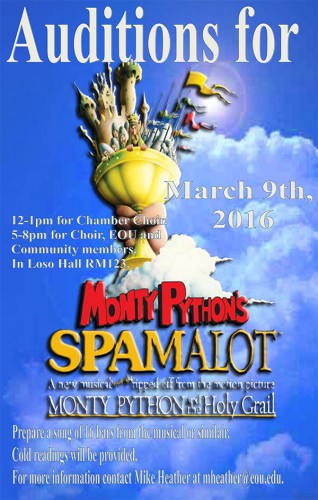 “Spamalot” is a musical lovingly ripped off from the motion picture “Monty Python and the Holy Grail.” It retells the legend of King Arthur and his Knights of the Round Table and features a bevy of beautiful showgirls, not to mention cows, killer rabbits and French people. (Did we mention the bevy of beautiful showgirls?) The Broadway production won three Tony Awards, including Best Musical, and received a total of 14 Tony nominations.

EOU Chamber Choir members are invited to audition from 12-1 p.m. Open auditions for other university and community members are from 5-8 p.m.

Sign up for a time slot in the Greenroom in Loso Hall, Room 104 and prepare a song of 16 bars from the musical or similar. Cold readings will be provided and callbacks made at 5 p.m. Friday, March 11 as needed.

“Spamalot” opens May 18-22 with nightly shows at 7 in EOU’s McKenzie Theatre. For more information e-mail Mike Heather, production director and associate professor of theatre, at mheather@eou.edu.