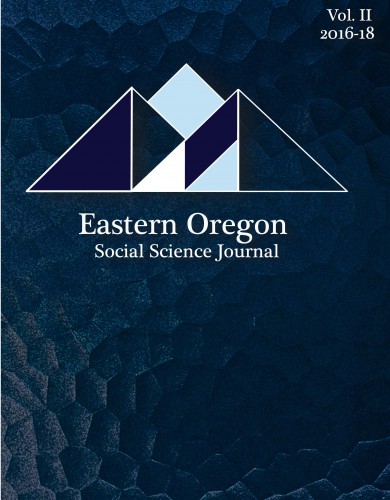 Jan. 28, 2019 LA GRANDE, Ore. –  Winning first place with a special merit for “Outstanding Theme” from the American Scholastic Press Association, the second issue of the Eastern Oregon Social Science Journal made a significant impact this fall.

Student editorial staff at Eastern Oregon University assembled the 2016-18 edition of the Social Science Journal last year, collecting contributions from the Anthropology/Sociology, English/Writing, and History departments. Student Editor Malcolm Zoon said he had a great experience putting the issue together.

“It has given me an opportunity to interface with the best and brightest students and give them an avenue to have their hard work and research publicized for their peers to appreciate and learn from,” he said.

Since 1983, EOU has been producing the Eastern Oregon Science Journal, giving students in the STEM fields the chance to have their work published in a professional setting. In 2014, the journal began accepting contributions from departments that it did not previously accept submissions from, including Anthropology/Sociology, Business, English/Writing, and Economics. This new branch of the journal became the Eastern Oregon Social Science Journal, which allowed even more students to benefit from the experience of submitting work to a professional journal.

Haley Stammen, an EOU alumna with a degree in English/Writing, received a special mention in the letter accompanying the “Outstanding Theme” award for her article, “When Life Gave Beyoncé Lemons.”

“Contributing to the Eastern Oregon Social Science Journal was a great experience, particularly given the nature of my research,” Stammen said. “It’s great for students to explore their interests and share their ideas with a larger community to instigate discussion from a variety of disciplines, especially as an undergraduate.”

Nate Lowe, Dean of the College of Arts, Humanities, and Social Sciences, said he sees EOU as more than just a place to conduct research.

“This journal is another example of the kind of special, collaborative learning experiences students and faculty can have at EOU,” Lowe said. “Students don’t just study science and social science here; they publish it, and through the making of this journal not only do they build a stronger community of burgeoning scholars on campus, but they deepen those essential skills – leadership, communication, creative and critical thinking – that will set them up for dynamic, successful futures.”

Both journals are partially funded through student allocations, but the EOU Foundation supports their continued publication. Donations are accepted online at eou.edu/scijou/donate. For more information visit eou.edu/scijou.