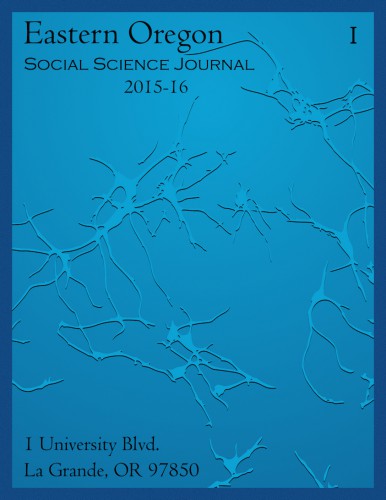 Alannah Jones, a recent graduate of EOU’s Master of Arts in Teaching program, and Zoe Mathias, an alumna of the biology program, took the lead in composing the inaugural issue of the social science journal. The experience offered insights into the publishing process for academic articles and hands-on practice communicating with professionals in the field.

The next issue’s contributions have already been accepted. To be published in the 2018-2019 academic year, the second edition is set to include articles by EOU anthropology/sociology, English/writing and history students.

“As much as I appreciate being part of an award-winning journal issue, I’m even more appreciative to know that social sciences is gaining a strong footing and recognition in the eastern region of the state,” said contributor and EOU alumnus Calvin Edward, who is now a graduate student at Sophia University in Japan. “I am confident that the EOSSJ will continue producing strong entries in the future and is able to make an impact in not only Eastern Oregon, but social sciences as a whole.”

As for the Eastern Oregon Science Journal, staff await printed copies of the latest edition, which are due to arrive on campus this month.

Amy Yielding, associate professor of mathematics and faculty advisor for the science journal, said readers should, “be prepared to be impressed with research completed at EOU.” Topics include: a novel approach in testing cannabis to ensure the safety of consumers by students and professors in our mathematics department, solutions to two different CoMap competitions completed by students in chemistry and mathematics, and the development of diagnostic sensors for bacteria detection developed by students and professors in our biochemistry department.