Student auditions for “America’s Got Talent” 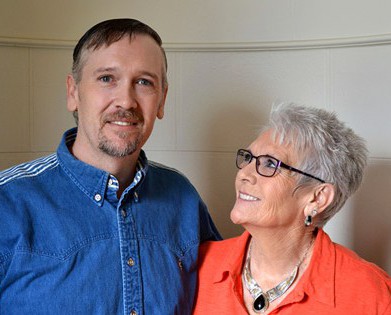 EOU photos by Dillon Starr / Shane Holly with his mother Lila Smith, an ever-present source of encouragement as he prepares for his audition in Boise Feb. 10.

LA GRANDE, Ore. (EOU) – A lifelong desire has been reignited for Shane Holly to perform using the instrument he was born with – his voice.

Soon, he will try out for NBC’s “America’s Got Talent,” one of the biggest reality series currently on television. The show is in the middle of coast-to-coast auditions and will be in Boise at the Taco Bell Arena Tuesday, Feb. 10.

Holly’s mother Lila Smith clued him in on the opportunity. She and Holly’s daughter Kaylee are planning to go with him to the audition.

“Mom is really the one who encouraged me to sign up and made me think ‘maybe I can do this!’ Holly said.

“I really like classic country and enjoy going back to its original roots,” Holly said.

The open call auditions for season 10 are with the producers of the show. If Holly is selected to advance to the second round, he will have the opportunity to perform for the celebrity judges. Judges for season 9 were Heidi Klum, Howard Stern, Howie Mandel and Mel B. Nick Cannon is the show’s host.

Holly knows first-hand how tough the industry can be. He has participated in vocal competitions before, operated his own karaoke business and even moved to “Music City” for a while to pursue his dream.

Holly is completing a double major in leadership, organization and management, and marketing,

“I lived and sang in Nashville for awhile and it’s very difficult to break into the market,” he said.

In recent years though, he began channeling his creative energy into carpentry and built up a reputation in the Ontario and Caldwell area. This helped him get a job with facility operations at EOU when he transferred from Treasure Valley Community College last year.

With the anticipation of a potentially life-changing opportunity ahead, Holly remains grounded in his desire to complete a bachelor’s degree in business from EOU in the fall. He is double majoring in leadership, organization and management, and marketing. Becoming a medical administrator specializing in geriatric care is his goal.

“I want to represent EOU and La Grande,” he said. “My professors have been so supportive, especially Dr. Shari Carpenter. She has been a great influence on me in earning this double concentration.”

Carpenter is Holly’s advisor and an associate professor of business.

“Shane is one of the most focused students I have ever had,” Carpenter said. “He is determined to succeed and willing to do the hard work needed. I know he will be successful on whatever path he chooses, be it music or a career in business, he will be all that he is destined to be.”

Holly’s resilience stems in part from his experience growing up on a cattle ranch in Adrian, Ore., a small city in Malheur County. His ancestors helped found the town in 1913 and the Holly name is still well-known in the area.

Much like the pioneers who came before him, Holly’s spirit has also been shaped by hardship.

He is a single parent, raising his daughter, now 11, since she was 2.

Holly said he expects to know in April whether or not he will advance to the next phase of the competition.

“It’s a once-in-a-lifetime shot and I have to take it.”