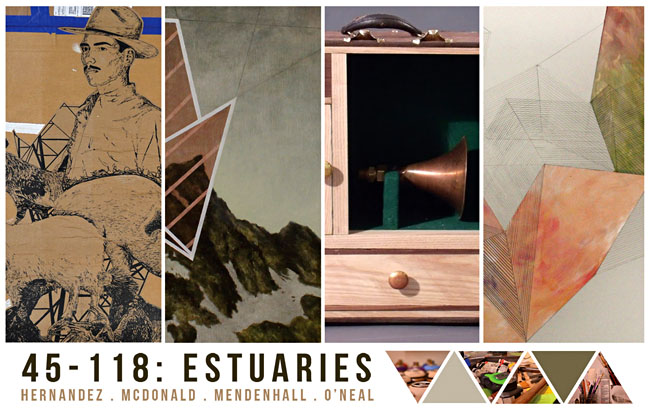 Born and raised in the predominately Hispanic city of Van Nuys, Calif., Hernandez was influenced by the street art, which covered alleys and billboards in his neighborhood. At age 12, his family moved to Simi Valley, Calif., where he became aware of his status as a minority.

Hernandez’s most recent work focuses on his Mexican culture and family. He juxtaposes the nostalgic images of family members with more contemporary forms such as street art. His subjects are depicted as monumental and iconic, and express a sense of pride.

The lowbrow materials used, from homemade wheat paste to brown packaging paper, are considered by society as low-grade and inferior. In this way, Hernandez’s subjects share a common bond with the materials, as people of Mexican decent are sometimes viewed as cheap labor and an inferior race in certain aspects of American culture. The combination of these materials with the people in the portraits transcends both stereotypes and is in no way cheap or inferior.

McDonald enrolled in a design course on a whim while attending Central Oregon Community College in Bend in 2009 and was instantly taken by art. He soon transferred that interest to EOU where he discovered painting and printmaking, which resulted in his decision to become an art major.

McDonald’s current body of work has evolved into large-scale paintings and prints that explore the natural landscape in contrast with that of the man-made, between the forms that have always existed and the forms newly constructed by man.

He references Romantic landscape painters by his use of realism through saturated colors and large open skies and their attempt to capture the sublime landscape, preserving it forever. At the same time, McDonald abstracts architectural aspects of the work, creating multiple layers within the landscape that almost seem to mimic the natural forms.

Mendenhall began his studies as a painter and only started making sculptural work within the last year. His work deals primarily with issues of communication that arose from his childhood struggles with high functioning Autism. It stimulated his creative capacities, but hindered speaking to the point that it was a terrifying ordeal. Much of his childhood was spent in silence accompanied only by his imagination, which led to his expression of thoughts and emotions through creating things.

Mendenhall’s work consists primarily of prosthetic sculptures and video performance, with each piece being a solution to a particular issue he faced in communicating with others. His interest in history motivated the work to center around the Victorian and Edwardian eras, which are the periods he is most enthusiastic about. He uses his knowledge of the period to create believable, yet mildly ludicrous prostheses employing traditional methods and materials. The alternate reality he creates explores the workings of the autistic mind and how “making” acts as his communication with others.

O’Neal grew up in Hillsboro and has always had an affinity for creating. While in high school, she enjoyed the balance of structured biology homework and the free-flow of her art courses. She continues this balance in college, majoring in business management and fine art, always balancing rigidity with creativity.

O’Neal loves a challenge and likes to see how she can work creatively inside boundaries. Her artwork explores a balance of structure and free form. It is the personal, internal struggle between organization and chaos that inspires her. The clashing of media, such as paint, graphite and string, replicates the difference between the commonplace and the spontaneous. She visually documents the discontent of her own internal space, between self-imposed order and attempts to break out, by using repetitious lines and free geometric shapes that collide on one plane in both her paintings and her wall drawings.

Both formats illustrate depth and feature layers that interact, connect and intersect, as well as coverage and exposure of an underlying structure. Both the geometric and organic forms are integral to each piece and to each other, as O’Neal feels the importance of her daily life comes from the balance of personal structures and the moments of creativity and discord.

For more information visit www.eou.edu/art/nightingale-gallery or connect on Facebook.