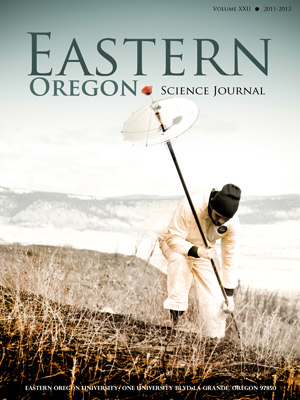 The latest edition garnered national ranking as the most outstanding college science magazine in 2013-14 among colleges and universities with enrollment of 2,501 or more students. It also received a first place with special merit award for superior design and content.

Amy Yielding is the EO Science Journal faculty advisor and an associate professor of mathematics. She recognizes these accomplishments are the result of a major team effort.

“Thanks to all the professors who produce original research with our amazing students, the art faculty for supporting the cover contest and the student editors for making it an award-winning publication,” Yielding said.

Included in volume XXII are submissions in chemistry, COMAP (the Consortium for Mathematics and Its Applications) and mathematics.

The issue’s editor-in-chief is Jonathan Gage Winde. Winde recently completed his degree in math and computer science from EOU and is in graduate school at the University of Washington’s Department of Aeronautics and Astronautics.

Cover art is by 2013 EOU graduate Henrik Sørensen, who is currently studying sculpture at Cranbrook Academy of Art in Michigan.

Plans to produce a new Social Science Journal are in the works for next year, and submissions to both publications are being accepted now. Submission guidelines, plus current and past editions are available at eou.edu/scijou.

Individuals interested in supporting the publication of student authors through donations should contact Yielding at 541-962-3314 or ayielding@eou.edu.