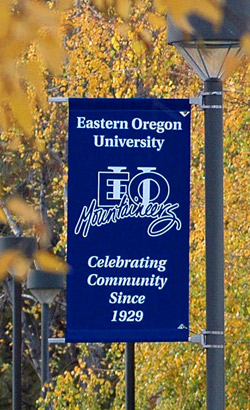 LA GRANDE, Ore. (EOU) – Eastern Oregon University announced today the members of a search committee that will be charged with finding a new president for the school.

The new leader will replace Dr. Jay Kenton, who began serving as interim president this past June, following the departure of Dr. Bob Davies.

The 18-member team includes representatives from the faculty, students and staff as well as the community and region, alumni and also members of EOU’s incoming governing board of trustees. Former State Senator David Nelson of Pendleton, who sits on the Oregon State Board of Higher Education (OSBHE), will chair the search.

The committee, working in concert with the Oregon University System and OSBHE will hold its first meeting at EOU Thursday, Oct. 23 with the goal of having a new president in place by July 1, 2015.

“This is an excellent occasion for the university to identify a new leader,” said Cathy Dyck, acting chancellor of the Oregon University System. “Dr. Kenton is preparing EOU for success, and a new president will have opportunities to begin working immediately with a new governing board as well.”

EOU has retained the executive search services of Witt/Kieffer, a firm based in Oak Brook, Ill. Representatives will be on campus next week, meeting with the search committee, university leadership, faculty, students, staff and members of the community as they gather information and input to help with the search.

Members of the search committee are: