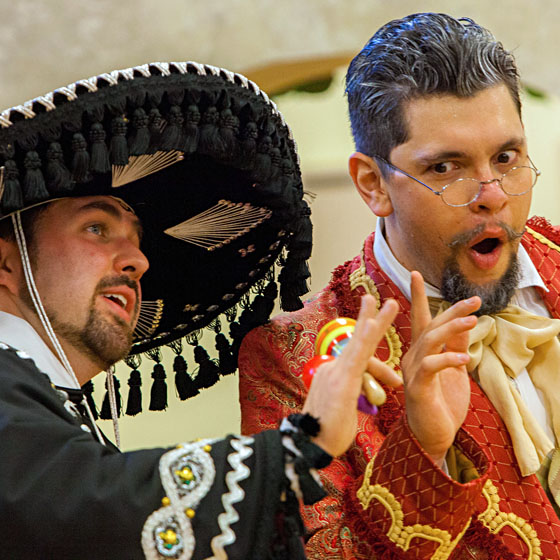 Image (c) Studio McDermott / Matt Chittick, left, and Brandon Morales are among the Portland Opera To Go cast members presenting a new bilingual version of “The Barber of Seville” for Eastern Promise students. The troupe is also giving a public concert with EOU vocal students at 7:30 p.m. April 9 in McKenzie Theatre.

LA GRANDE, Ore. (EOU) – More than 2,000 students enrolled in Eastern Promise will be treated to a new bilingual production of Rossini’s “The Barber of Seville” when Portland Opera To Go visits EOU April 6-9.

The professional touring group will give seven performances during their stay, including a public concert at 7:30 p.m. Thursday, April 9 in McKenzie Theatre in Loso Hall. Admission is by donation with proceeds benefitting EOU’s music program.

Fifth-graders in Eastern Promise’s Academic Momentum program will be at EOU Monday through Thursday to take in the performances and explore the university campus.

Groups volunteering to assist with activities include the EOU Chamber Choir, students in the English for speakers of other languages program advised by Tawnya Lubbes, assistant professor of education, and EOU Ambassadors.

For Thursday’s public concert, Portland Opera To Go will perform songs and arias from a wide range of operas. Members of the cast will also join Alexis Hamilton, manager of the Portland Opera’s education and outreach division, in offering master classes throughout the week to EOU vocal students. Some of those students will sing on Thursday.

“This is the 15th year Portland Opera To Go has included EOU as a destination on their Northwest tour,” said Peter Wordelman, professor of music. “It is always one of the musical high moments of the year and we are thrilled to be able to involve Eastern Promise and Academic Momentum students.”

For more information about the public concert contact Wordelman at 541-962-3352 or e-mail pwordelm@eou.edu.

Details about Eastern Promise and its programs are available at www.eastern-promise.org.