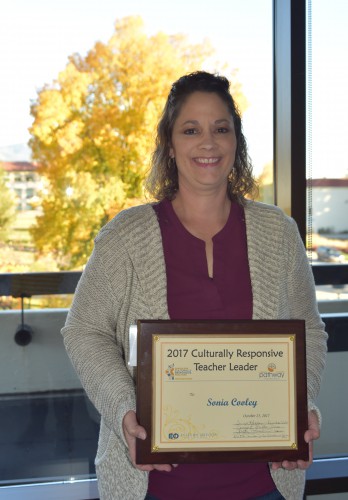 The Center for Culturally Responsive Practices at Eastern Oregon University presents this award to an area teacher every other year. Cooley, who has taught at PHS for 18 years, was selected for her participation and leadership in the Oregon Teacher Pathway (OTP) program.

Cooley is one of the lead teachers in EOU’s Oregon Teacher Pathway (OTP) program. Her commitment to the four-year-old program has contributed to its success and recognition at local, state and national levels. Cooley teaches the EOU Introduction to Education course for future teachers, and has guided 13 PHS graduates toward the education program at EOU.

Tawnya Lubbes, director of the Center for Culturally Responsive Practices, said Cooley’s mentorship has played an integral part in leading students toward a career in education.

“Sonia is well respected by her students and colleagues and her name is frequently mentioned as students describe their most influential teacher,” Lubbes said.

Many of her previous students shared testimonials about her ability to form positive relationships while maintaining high expectations for all students who enter her classroom. Cooley said she is grateful for EOU faculty and school district leaders who have supported her efforts to implement the OTP program in Pendleton.

“The relationships I have built with OTP students over the past few years are extremely rewarding,” Cooley said. “It has been so much fun to see them grow at EOU as potential educators.”

She said the program has opened her eyes to the value of those relationships and new ways of strengthening them through getting to know her students and learning about their lives as a whole. She said her approach to culturally responsive teaching is about respecting and adopting all cultures in and out of the classroom, while helping all students reach their educational goals.

“Sonia’s work with the Oregon Teacher Pathway program should be commended, as she has impacted the future of many students,” Lubbes said. “Her leadership in culturally responsive practices has been recognized by her students and colleagues, and we are pleased to honor her outstanding work!”