A passion for filmmaking 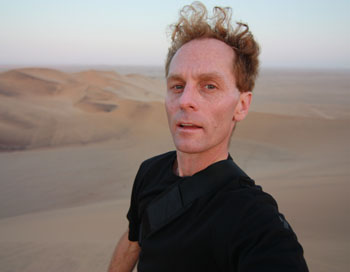 Skye Fitzgerald, a 1993 EOU graduate, will give a presentation today at 1 p.m. in the Hoke Main Lounge.

LA GRANDE, Ore. (EOU) – Producer, director and documentary filmmaker Skye Fitzgerald will give a special presentation of his work during EOU’s 2011 Homecoming weekend.

Fitzgerald will speak at 1 p.m. today, Friday, Oct. 14 in the Hoke Main Lounge.

A 1993 EOU graduate, Fitzgerald is raising awareness of social issues throughout the world with his recent documentaries focusing on guerrilla warfare and human rights violations. The story of the “Bombhunters” was shot on location in Cambodia while Fitzgerald was on a Fulbright Scholarship. It chronicles the plight of local citizens living with and harvesting unexploded bombs as a source of income when sold as scrap metal. The film gained support from the Sundance Documentary Fund, the U.S. Institute of Peace, the U.S. Department of State and the Paul Robeson Fund.

Another of Fitzgerald’s films, “Finding Face,” investigates a crime of acid violence in Southeast Asia. It has been broadcast to an estimated 30 million American viewers and won human rights or special jury awards at multiple festivals in addition to winning a coveted national Clarion award. Fitzgerald’s most recent work, “Peace Commandos,” is about peace-building in the Congo and is being released to the educational market this year.

Fitzgerald’s emergence in the world of film began soon after completing his master of fine arts from the University of Oregon. He directed 2nd Unit on the feature “Ricochet River” starring Kate Hudson and quickly became drawn to non-fiction. He has produced or shot projects focused on developing nation and human rights issues in over 20 countries. In 2001 he co-produced the award-winning film “Monsoon Wife,” the first full-length feature to be shot completely on location in Cambodia since 1965.

Other unique projects which Fitzgerald has served as a producer or cameraman include the documentary “Return to Everest for Eddie Bauer,” “Dateline on Mt. Rainer” for Dateline NBC, “Frogpond” (pilot) in the Philippines, “Epilogue of War” documenting landmine and UXO victims in Vietnam, a segment for CNN’s show “Mainsail on the Antarctic island of South Georgia,” as well as segments for the History Channel’s “Gangland” series and the Weather Channel.

For more on Fitzgerald visit his production company website at www.spinfilm.org.