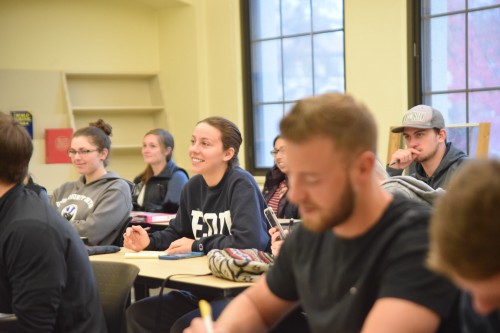 Re-posted with permission from OTEC.

The brand-new OTEC-EOU Rural Scholarship Program will award four freshmen the opportunity to have their entire tuition paid by OTEC and EOU if they commit to attend the university for all four years.

The vision behind this program is to give local students peace of mind as they prepare for the world outside of college and to stimulate rural economies and communities by keeping local students local.

Recognizing that each dollar kept and spent in the local economy returns that money back to our communities, this scholarship program incentivizes high school graduates from Baker, Grant Harney and Union Counties to complete their degree at EOU.

As long as a student meets the OTEC-EOU scholarship criteria, fulfills their obligations for the OTEC Internship program, and successfully completes a Scholarship Renewal form each year, the student may receive a scholarship from OTEC matched by funds from EOU annually for up to four years to complete a bachelor’s degree.

Eligible applicants will receive a scholarship equivalent to 100% of tuition costs for the degree period enrolled. Details for the criteria of the scholarship and a link to applications can be found at otec.coop.

About the cooperative
Oregon Trail Electric Cooperative (OTEC) is a not-for-profit, member-owned electric cooperative that serves over 31,000 homes and businesses in four counties in Eastern Oregon. Headquartered in Baker City, OTEC has district offices in Burns, John Day and La Grande.