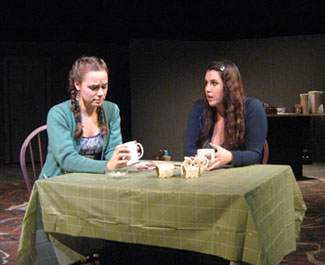 October 26, 2011
LA GRANDE, Ore. (EOU) – The bond between parent and child is unbreakable, but the play “‘night, Mother” takes the relationship of one daughter and her mother to a different level.

The show opening Thursday in EOU’s Schwarz Theatre in Loso Hall is a tour de force conversation between Thelma and her daughter Jessie, who has just confessed her plan to commit suicide at the end of the night.

Jessie, a woman in her late thirties, is struggling to find her place in society. Thelma, now in her late sixties, is also trying to find peace with the life she has paved for herself. Their dialogue is described as a fierce, emotional back-and-forth that keeps audiences on the edge of their seats.

“’night Mother” is about relationships and the way a person’s struggles can be overlooked when one is too concerned about their own existence,” Borgwald-Diaz said.

The director’s first introduction to the world of the dramatic arts came when she enrolled at EOU. A Grande Ronde Valley native from Elgin, Borgwald-Diaz started out with an English degree in mind, but switched her major after taking several theatre classes.

“I chose to direct “‘night, Mother” because I was intrigued by the mundane reaction to the circumstances at hand,” she said. “I feel that this play will leave its audience asking questions about life and the way we overlook the simplest things.”